I know why it’s called Sheep Mountain.  Only mountain sheep can prance around on an incline like this. (Is there such a thing as mountain sheep?)

Sheep Mountain is part of the Round Mountain trail, and has an elevation gain of 3000′ over a 5-mile stretch.  I knew the hike up would be a non stop cardio workout.  I also knew the descent would be an arduous knee wrenching event.

I was testing out my new backpack, the Osprey Kyte 36, and had it  L O A D E D. (Against the advise from my fellow hikers.)  I told them that if (when) I started lagging behind to not wait for me, I would catch up. 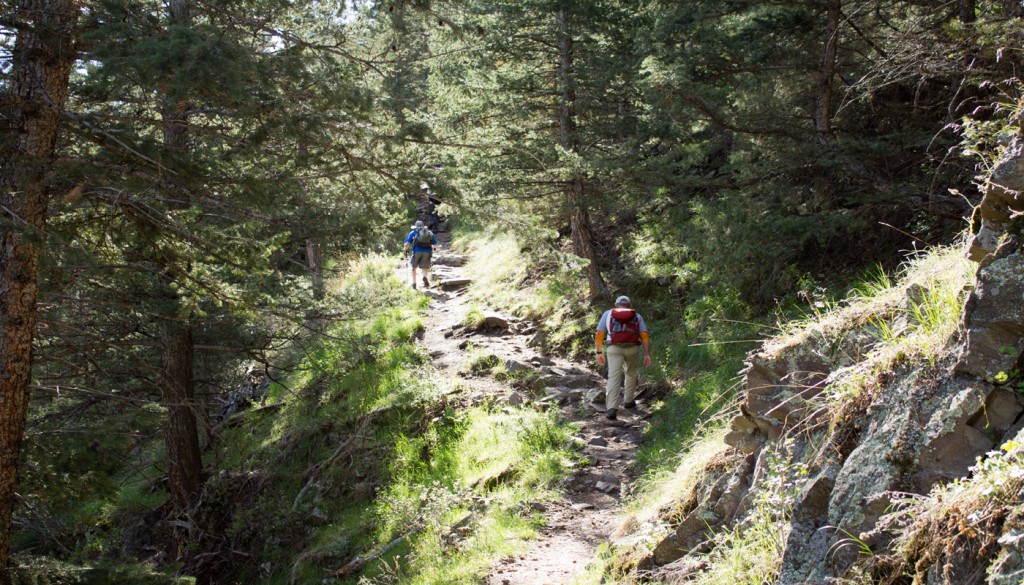 With the sound of the Big Thompson River roaring with white water rapids, the cardio level heartbeat pounding in my ears, my lungs expanding to capacity trying to suck up every ounce of oxygen there was at this altitude and my boots tripping over the rocky trail, I was on my way up to the summit.

“Why did I put so much crap in this pack?!?” “Why did I even bring it!”  I was carrying 6.5 pounds of water (100 ounces,) food, a medical kit, Trekking poles, my camera AND phone, a Kenneth Cole down jacket in a compression sack, (WTH!  It’s May for Gods sake!) Gaithers, a Leatherman, sunscreen, butt wipes (a.k.a. multi purpose wipes) an extra pair of smart wool socks, my Tilley hat, the shirt I took off before I even started the hike, and last but not least, my driver’s license, so they can identify the body when I am found.  All in all, about 22 pounds.  I trudge on. 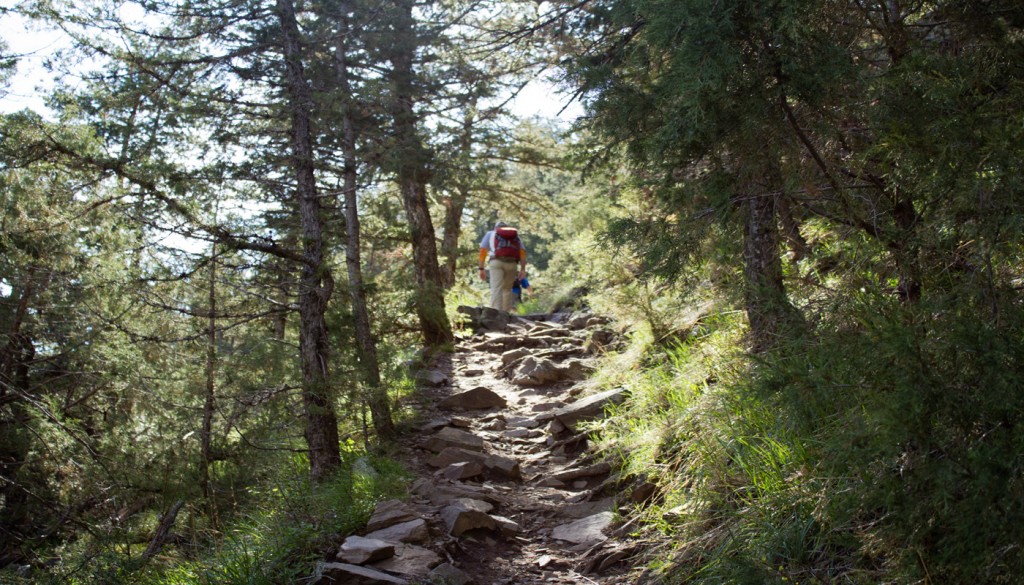 As my fellow hikers quickly disappeared in front of me, I continued at a snail’s pace through molasses.   My eyes were focused on the rocky trail, not the climb up.  I would, however, take a quick glance up every now and then to get my bearings, but my eyes quickly darted back to the ground.  I didn’t want to see how much further the summit was.

Now, to make me feel worse, a guy (kid) and his dog come RUNNING past me.  About 30 minutes later I hear heavy panting behind me.  I think, “Oh, GOOD! Someone is coming that sucks at this too!”  Nope, it was another runner with his OLD chocolate lab.  I step to the side so the runner could continue, and I look at the old dog with the gray muzzle as he trots past me.

Miles 1, 2 and 3 are behind me and I feel like I have been climbing for several hours at this point.  My legs feel like lead, my breathing has finally gotten to a level that is not embarrassing, and I believed I would run out of water before the hike ended. 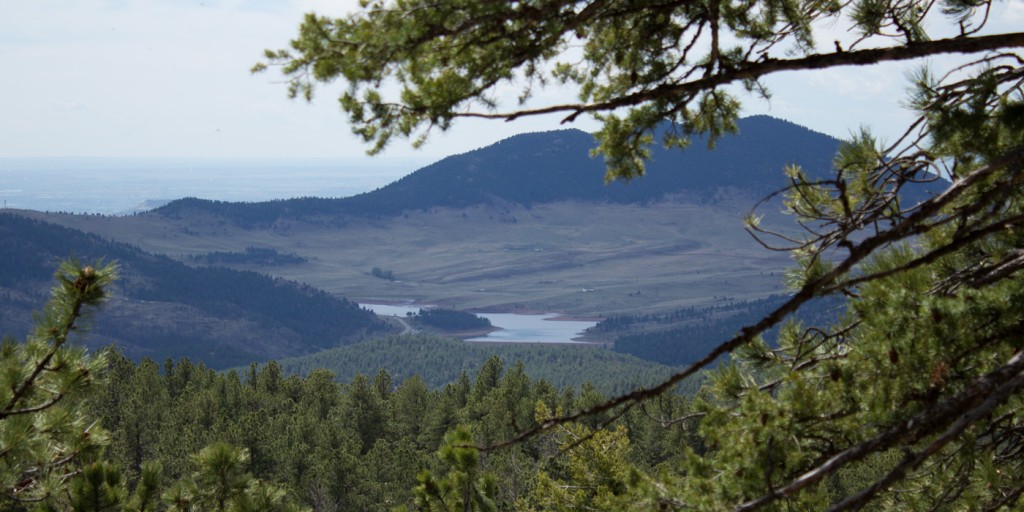 Prequel to this little story is the fact that on Thursday, Ashley (trainer) KILLED my legs with a workout.  I told her to, but I didn’t think it would be as bad as it was.   Saturday night I was still having a hard time walking without looking like I had hemorrhoids , and the stairs? Forget about it.  I was wishing there was a chair lift in this house.  Early Sunday morning I text Mark to let him know I was not going, my legs were still killing me.  An hour later I thought, “You big sissy!  You are going on this hike whether you want to or not!”  I text Mark back and said I would be there.  The bottom half of my body was not happy as I packed my gear. 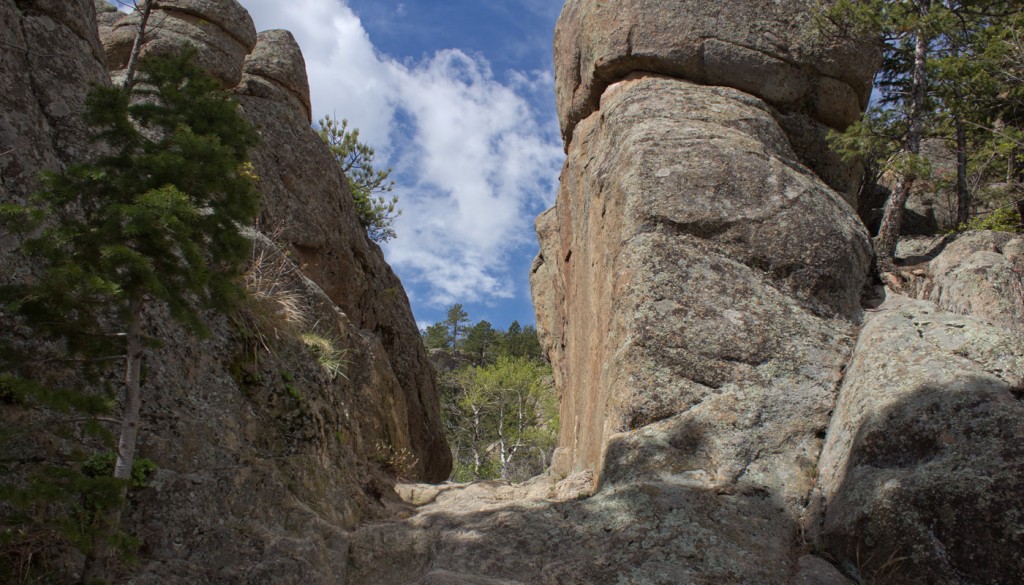 Mile marker 4 is in sight.  I hear voices behind me, I turn, but saw no one.  I am now thinking I am totally delusional.  I hear voices again.  I turned to find a young couple with their big white dog and I think to myself, “OH HELL NAH!!!  You will NOT pass me!!!!”  My stride lengthens. 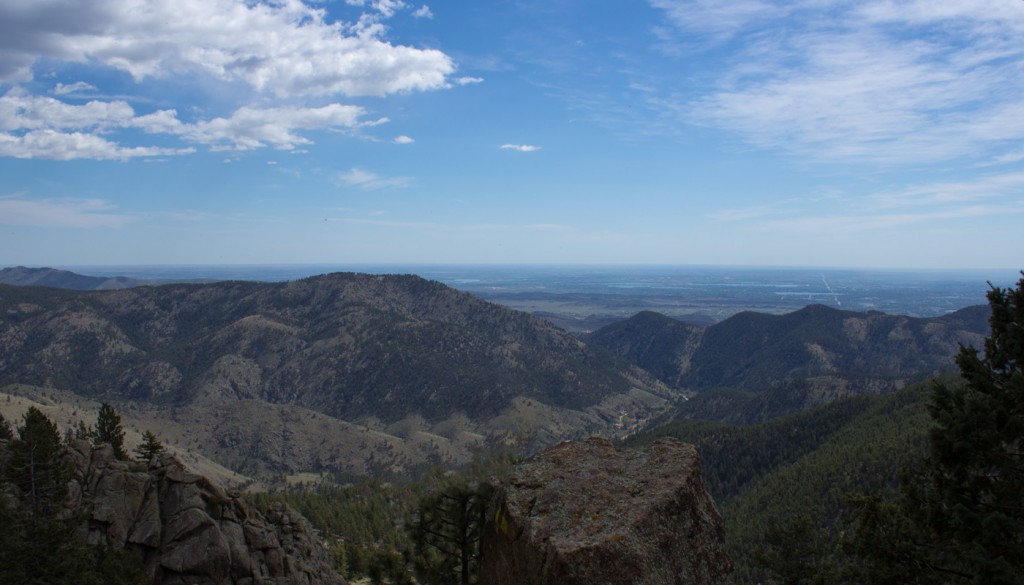 My legs are drunk at this point.  They will not walk in a straight line and are staggering all over the trail.  My drunk legs are trying to tell my oxygen deprived brain that we must have passed the summit because clearly we have gone over a mile already.  Ahead of me were two guys coming down the mountain.  They must have been mind readers because I never heard anything come out of my mouth.  Maybe it was my dazed, blank stare and the lone tear (sweat) running down my salt stained cheek.  One of the young men said, “You’ve got a tough climb ahead of you and a good bit of distance too.”  I continue to stare at them, with nothing but bafflegab coming from my mouth.  My eyes follow them down the mountain.  I then spot the 4 mile marker not far behind me.  YOU’VE GOT TO BE KIDDING ME!!!!! I haven’t even gone 300 yards!  For a split second I thought of going back down, but I don’t quit.  Ever.  I trudge on. 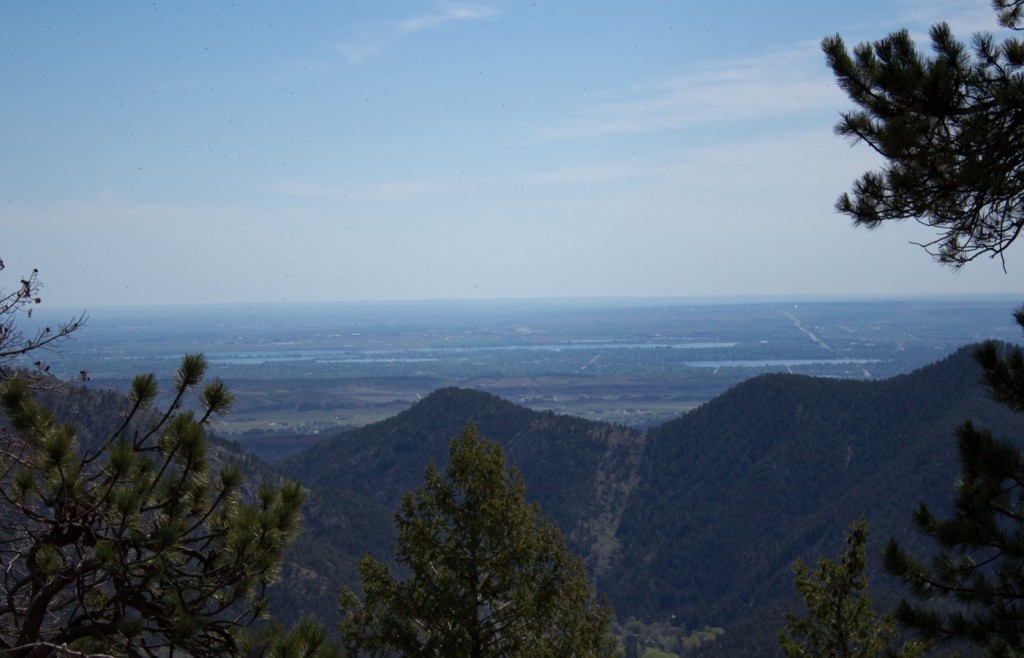 In the distance I hear the rolling thunder, and look up.  The wee bit of sky I could see through the trees was an ominous grey.  I knew it was supposed to rain today, but not until much later.  I trudge on.

Voices.  I don’t look back.  I didn’t want to see a three-year-old coming up behind me carrying a 15 pound pack all the while laughing and singing nursery rhymes.  These voices were coming from in front, I look up.  It’s my group!   They had been on the summit for 25 minutes.  I would have guessed at least an hour. 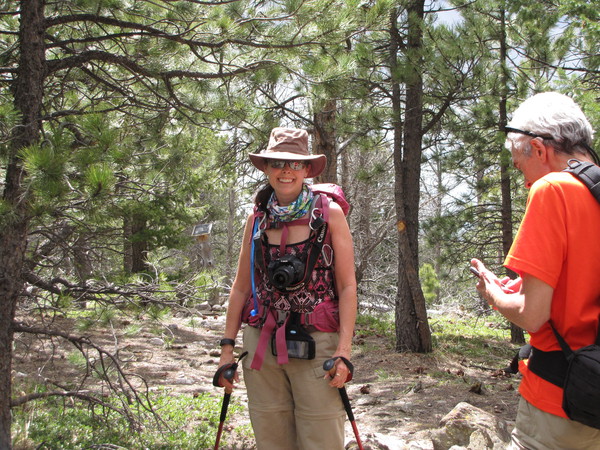 Years of running have affected my knees, and not in a favorable way.  The ascent was a killer, the descent would put me under.  My knees don’t hurt on a daily basis.  I can go to the gym, walk, climb stairs, no problem.  Descending a mountain?  Not Cool.  The sudden stopping when you plant your foot on the rock below is the killer.

As the thick, grey clouds continue to roll in, and the thunder cracking in the distance, we start the trek down Sheep Mountain.  The first four of our group take off, at a speed that made my knees cringe.  Mark and I were the last two.  I was in no hurry.

Mile marker 4 is where the rains started to fall.  Big drops of rain.  So big, that when they hit the brim of my hat the brim bent.  Cold rain.  I don’t have much on and I considered zipping off the bottom portion of my pants on the summit, but decided not to take the time.  Glad I didn’t. 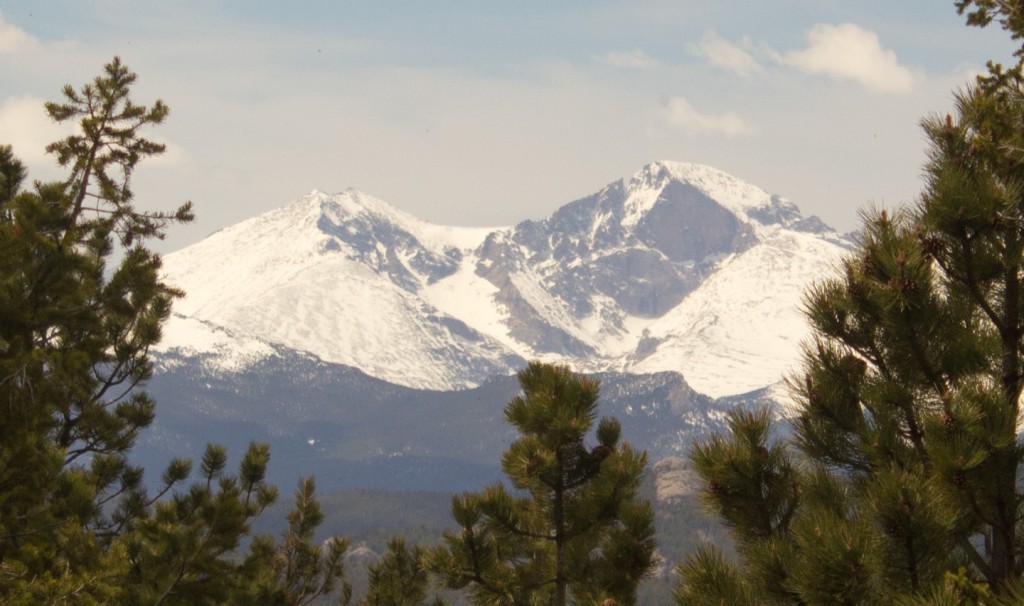 Then the hail came.  Small hail, pea sized, but still hail.  Have you ever felt the stinging of hail on naked skin?  I can now say I have.  Remember that down jacket in my pack?  Yea, I thought about it for a moment, but I don’t believe a down jacket in the rain is the best way to go.  I continue on while being hammered by hail.  I did have enough sense to bring a zip lock bag for my camera.  A poncho has been added to the list of things to get before my next hike.

We are descending at a much faster pace than what I would like to be going,  but the rain and hail are forcing me to go faster.  My knees are screaming and I did not tie my boots tight enough, which meant my feet are sliding forward with each step.  Painful.

Mile marker 3, then 2.  Just past the 1 mile marker, the rain stopped, and there was silence.  My knees told my brain to go on without them, they were toast. 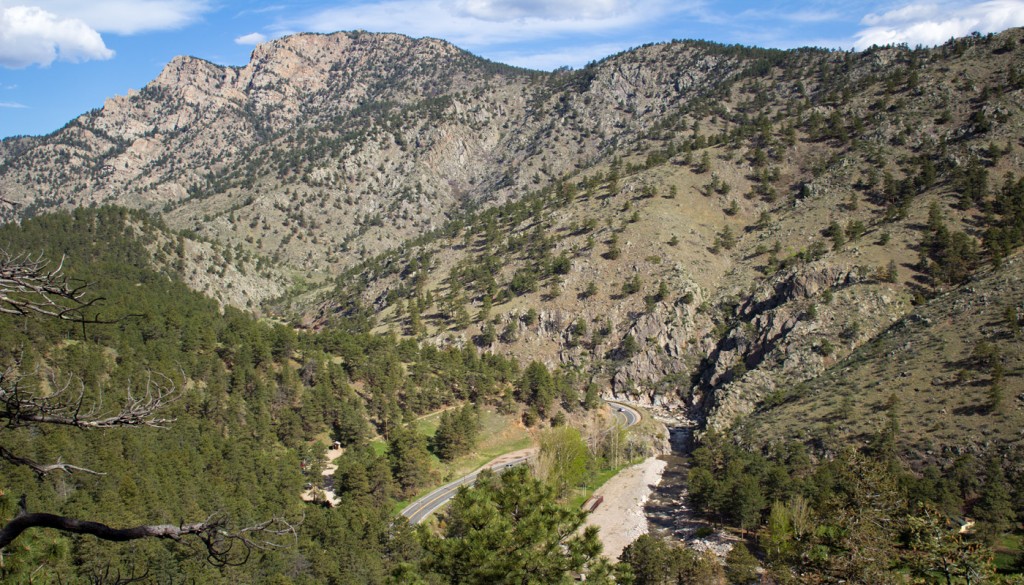 I don’t remember driving home.  Obviously I made it.   I unloaded my gear, changed into my warm, dry jammies and crawled between the sheets.  I did not perform any of my diurnal activities.  I did not shower, wash my face nor did I brush my teeth.  I did not care.  (The joys of being single.)  I grabbed my computer to write this story, but for the first time in my 51 years, my mind was completely blank, nada, nothing was there.

The next morning, I felt dazed and confused which is no different from any other Monday, and I was already planning the next adventure…