…we were off!  Now, the BEST way to see “The City” is with someone who lives there, and lucky for me, my girlfriend has lived there for the past 20 something years.  No tourist map was needed!

Let me start out by saying, IT WAS COLD! I’m not complaining, (I prefer the cold, and I have always said, “you can always add more clothing, but, you can only take off so much before getting arrested or have people laugh at you.”) I’m just letting you know.  Remember the movie “A Christmas Story” and Ralphie’s mom was wrapping up Randy with a tremendous amount of clothing for his walk to school?  That’s kind of how I felt I looked like! 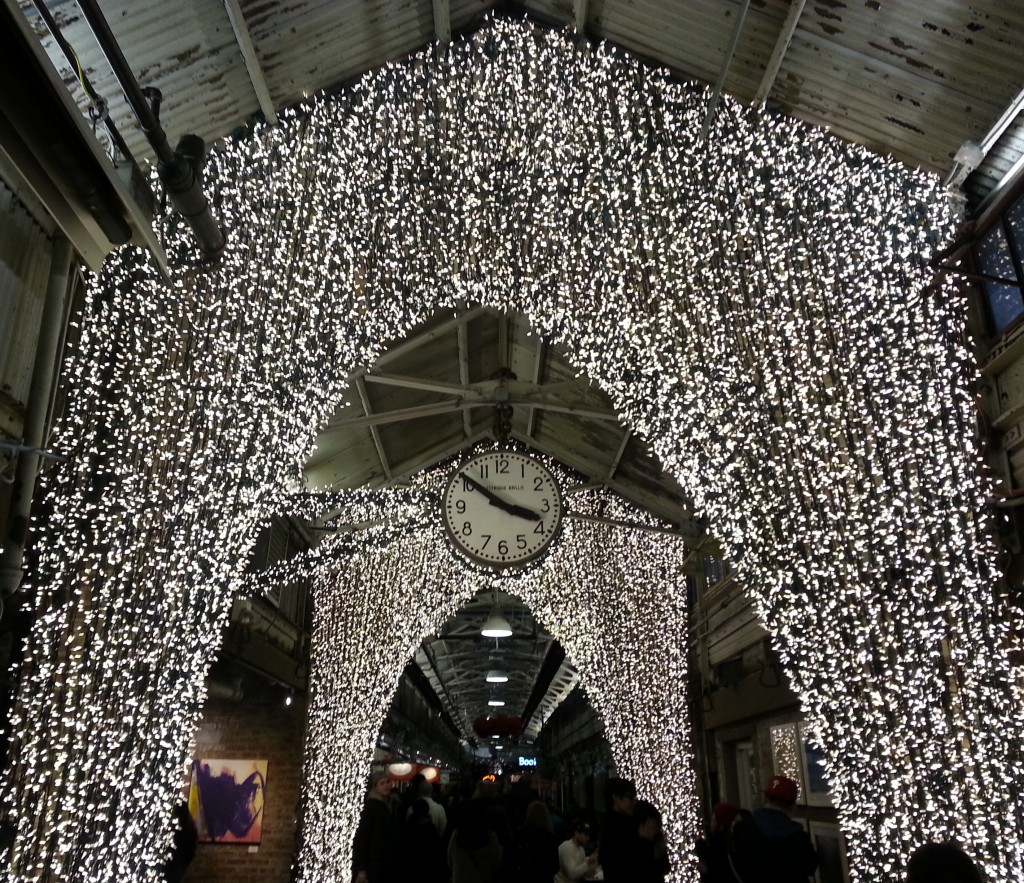 We quickly found Chelsea’s Market and started meandering through the building. (As I peel off one layer after another)  The “spice guy” was interesting.  I had never seen so many different spices and teas laid out like this.  If the spice or tea you chose was on the front row, the spice man would scoop up a portion with a long, and I mean long spoon, (It was at least 4′ long.) and place it in a small tin without dropping a spec. IMPRESSIVE! 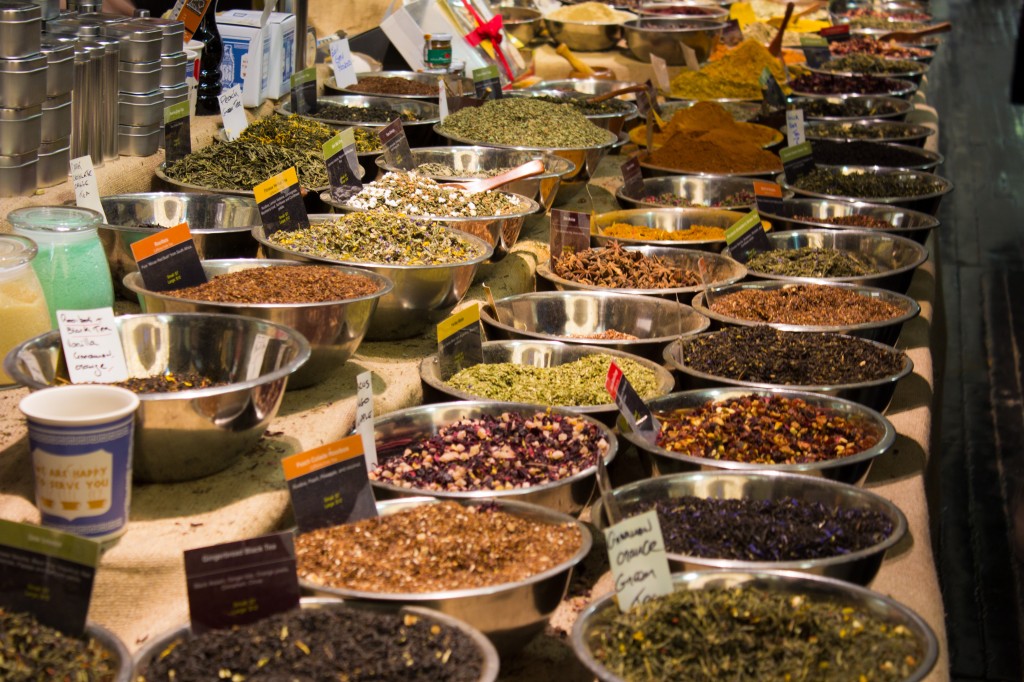 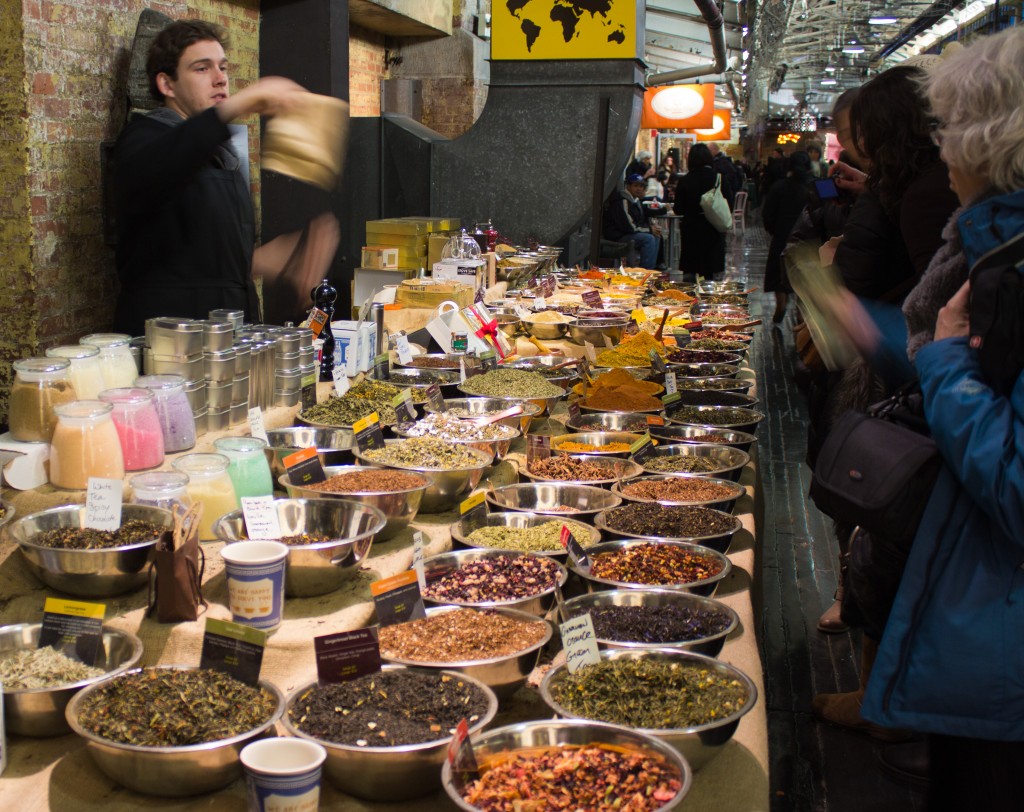 Then there was the butcher shop that smelled divine with their different meats cooking on the “in-store” grill.  Any kind of meat you could imagine was there, and in the back was a whole cow hanging.  Tell them what cut you wanted and it was cut right before your eyes.  That is fresh!

With several bakeries to choose from, it was hard not to walk out with some sort of goodie or a good heavy crusty bread.

The produce market was by far my favorite!  They had apples that were so small that it would take at least 10 of them to equal one good-sized Honeycrisp apple. (My fave!)  There were fruits and vegetables that I had never seen nor heard of before, and the prices were not bad either.  If I lived anywhere near here, this would be my market of choice.  There were so many things I wanted to purchase, but I didn’t want to lug them around for the next several hours.  Next time, I will bring a backpack, or a large rolling suitcase. 🙂

Whipping, frigid winds in New York, made me bundle up again as we caught a ride on the subway. We were headed to Tiffany’s uptown. I didn’t see anyone having breakfast, but there was a Brobdingnagian bounty of beautiful baubles. Again, I left with nothing… 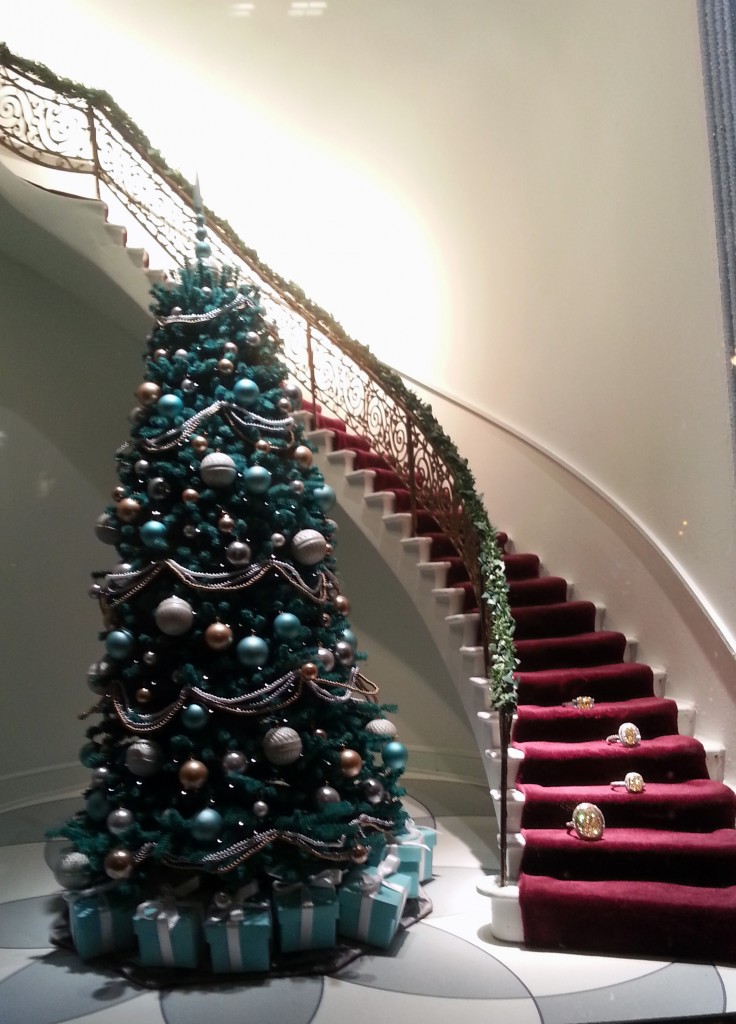 The TREE!!!! Yes! I got to see the tree. I was tickled pink that it was still up, and I was astounded as to how big it really was. The happy ice skaters, and happy couples, and happy children just made me happy! As we walked to the other side for another picture, a “movie” started playing ON the building behind us. 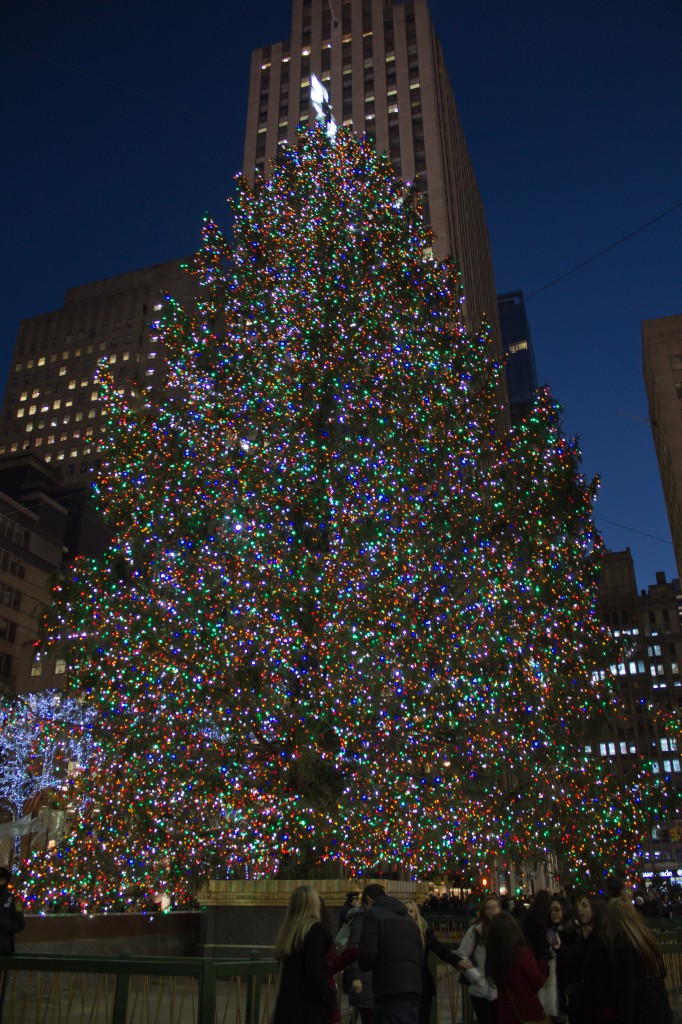 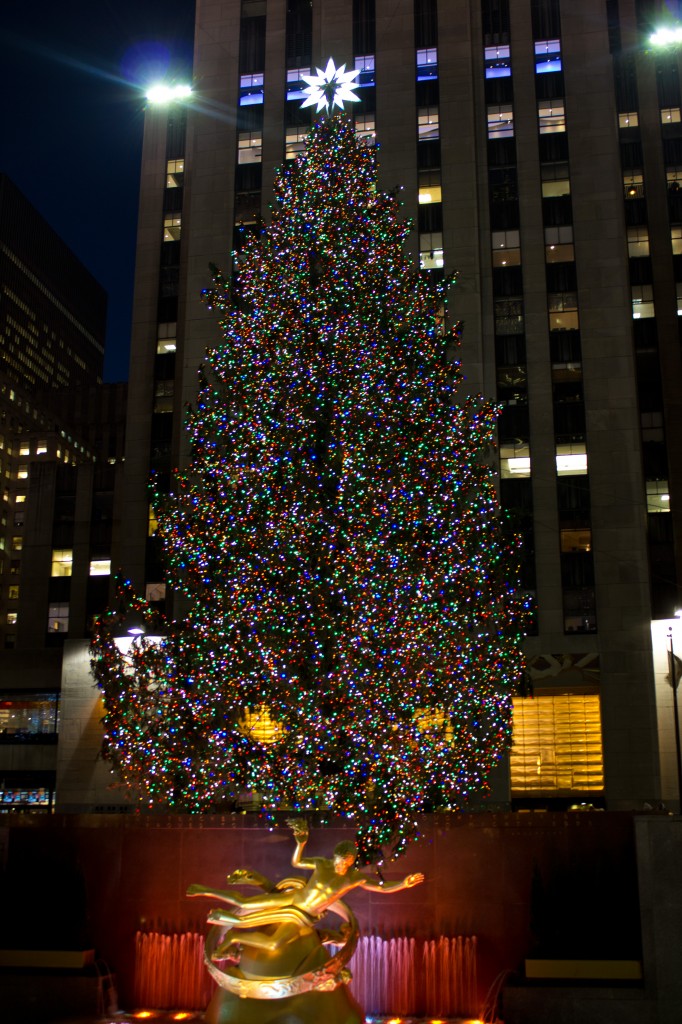 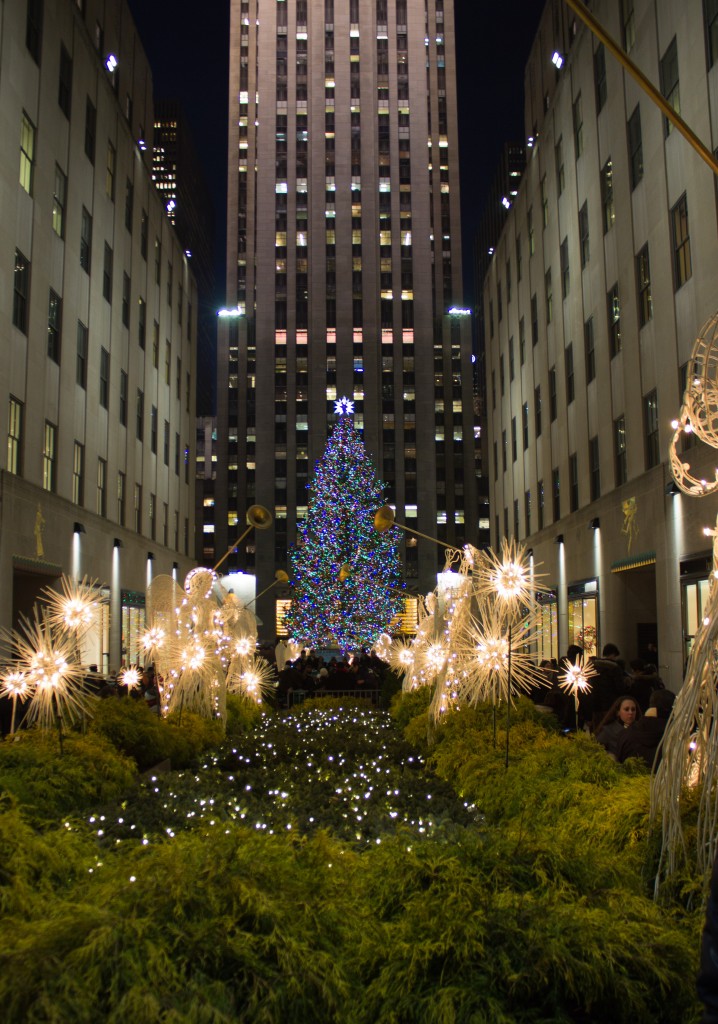 St. Patrick’s Cathedral. Extraordinary.  The last time I saw a Cathedral like this it was in Europe.  I easily could have spent 4 hours here, but Mass was being held and I felt odd taking pictures. (Other tourists were taking pictures also, so don’t judge.) What a majestic building, they don’t build ’em like this anymore. 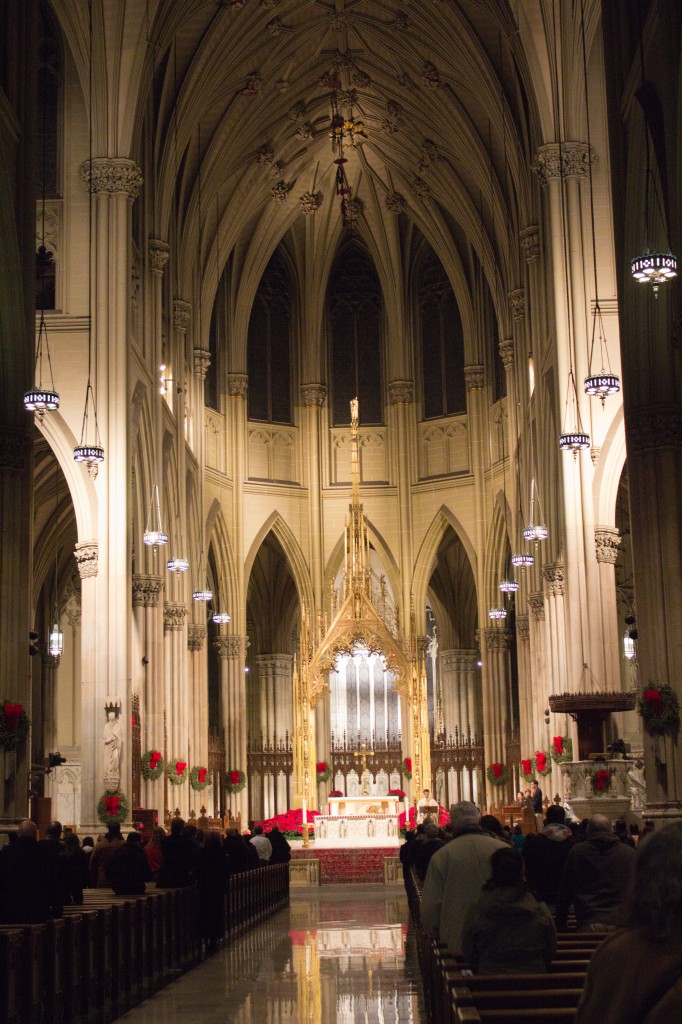 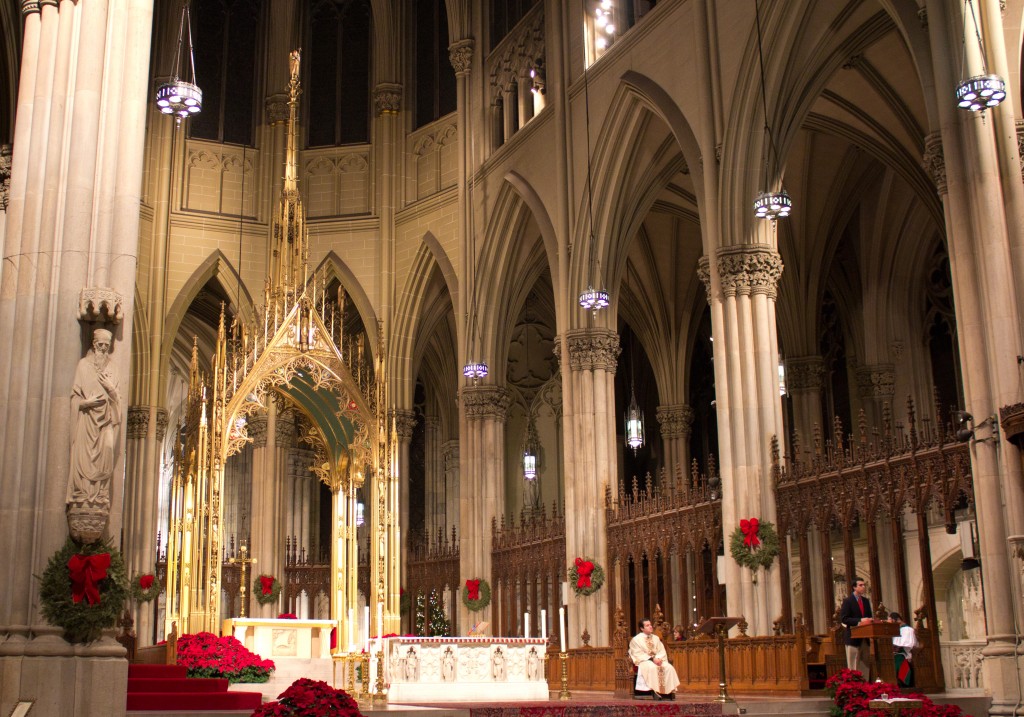 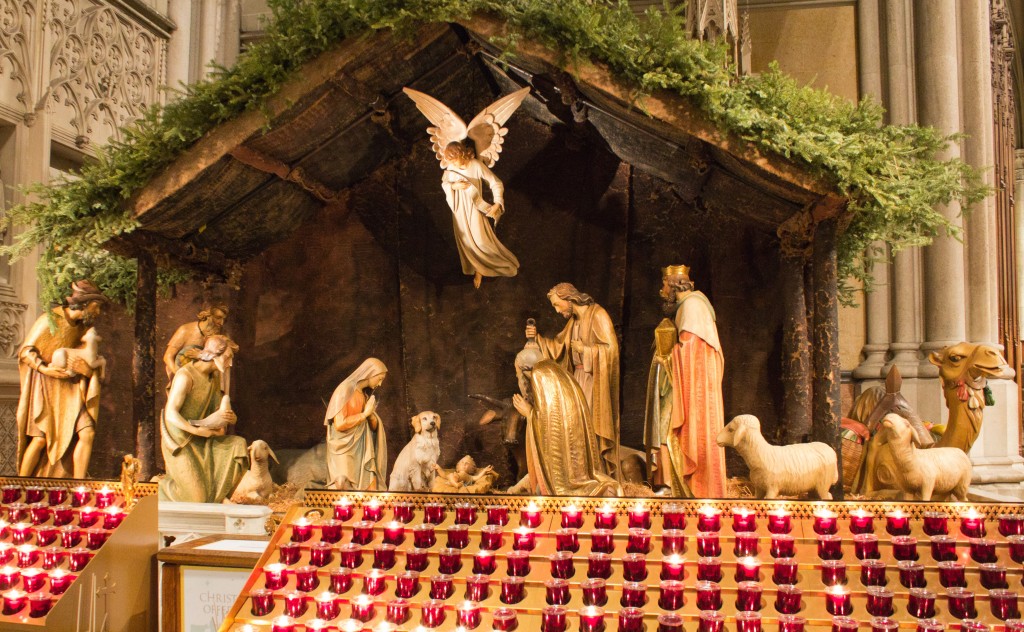 After oohing and ahhing over the Cathedral we popped into the Plaza Hotel for a quick look around, and when we walked past Central Park I feel sorry for the horses that were just standing around on the concrete for hours waiting for someone to want a carriage ride. (Poor horses!)

Times Square.  WOW!  It was packed!  I can’t imagine what it was like on New Years Eve.  The bright lights, crowds of people, shops, restaurants. I couldn’t take it all in.  I didn’t understand the people dressed up in costumes though.  Elmo, Cookie Monster, Batman, those kinds of costumes. 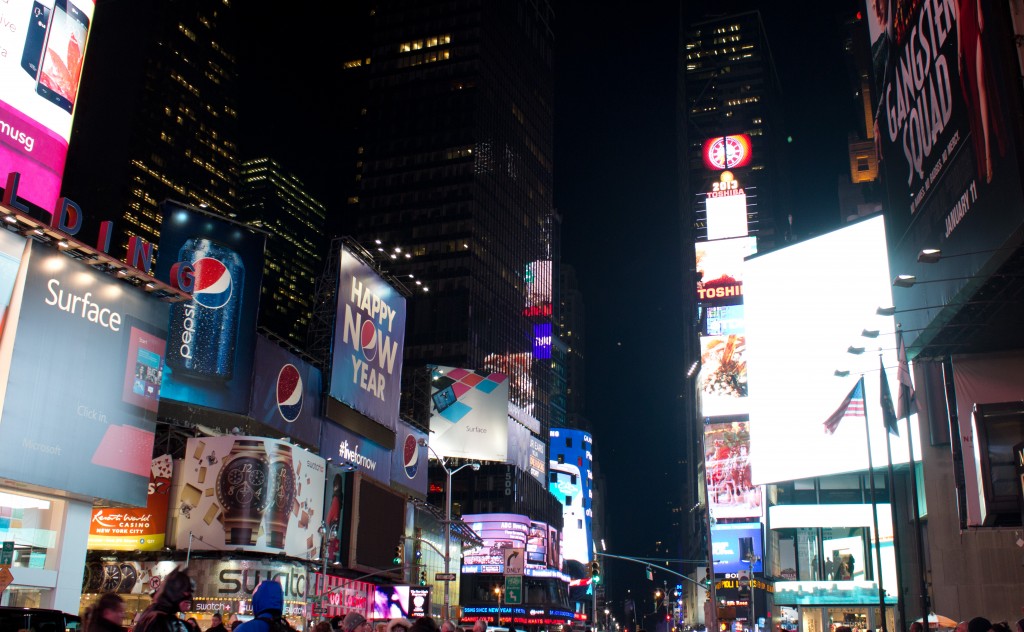 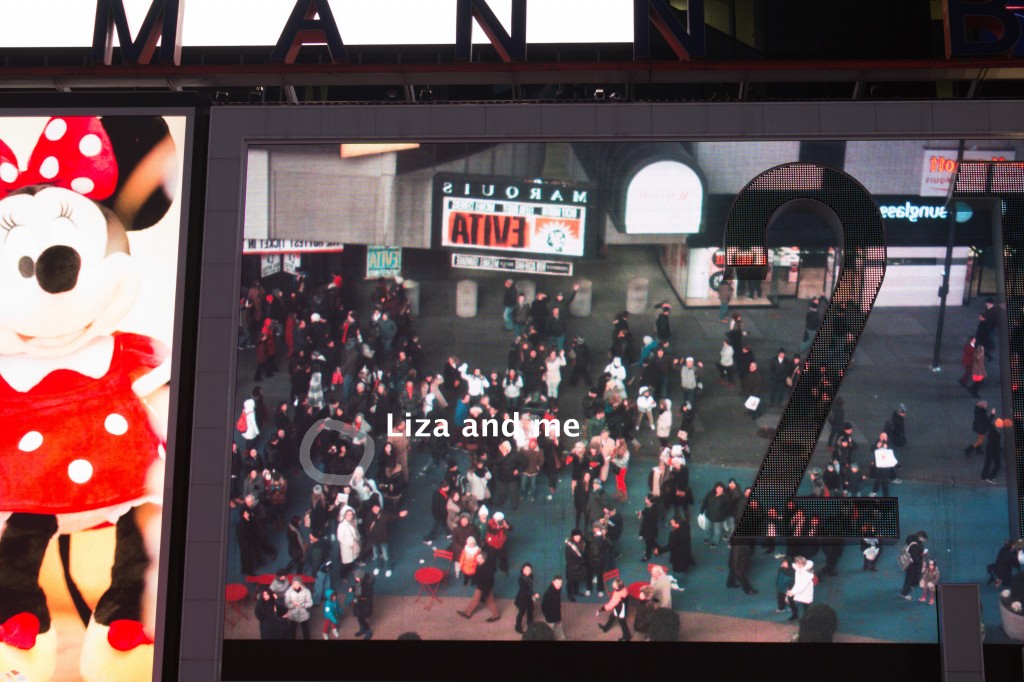 Off to dinner we go!  After meeting up with Liza’s husband, we went to an Indian restaurant, Milon Bangladesh Restaurant.  Now, I have never been to a restaurant that was BELOW another restaurant.  Nor have I been to one where I had to bend over slightly (I’m only 5’3″) because of all the dangling lights and decorations hanging from the ceiling.  The atmosphere was lively and the food was stupendous, (thanks to my friends ordering for me!) and the company was the best.  My stomach was at its maximum capacity for foodage when my friends said they had one more surprise for me. 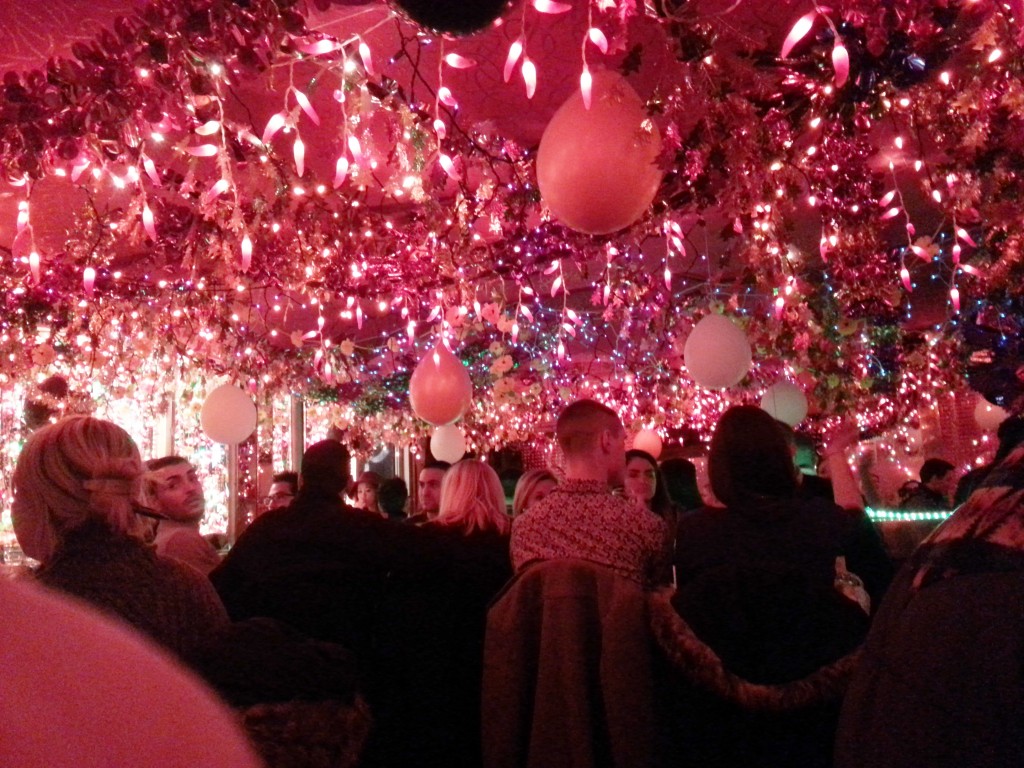 I am now waddling down the streets of Manhattan, thankful for a little more walking to settle the enormous amount of food I had consumed, when we rounded the corner and stopped in front of Venieros Italian Pasticceria .  Venieros was opened in 1894, and is America’s oldest Italian Pastry Shop.  We found a table in the packed Caffe’ (it was 11:30!) and picked up a picture menu.  There were three picture menus with all the different pastries  pies, cookies and cakes they make.  I have never seen a menu with that many items, and they were all sweets.  Off to my left, and one table back, was a group of people conversing in Italian.  They were Italian.  Good enough for them, good enough for me!  I sampled my first Cannoli, Marzipan cookie and my fruit tart was to die for! (The two bites I had.  Did I mention I was stuffed?) Magnifico!

It now hurts to walk I am so full. (Have you ever been to that point? Not a good feeling!) We slowly strolled back to the car and when I settled in for the two-hour drive back to the North Fork of Long Island, I found myself earning for another helicopter ride to expedite the travel time.

When we arrived at the house, the moon was just rising over the water and was simply spectacular.  I, unfortunately, was too tired to set up my equipment to get a decent shot.  I knew I had to be up in a few hours for…