The sound of footsteps woke me up; it was early morning, dawn had not broken.  I couldn’t  see who/what it was as I had the tarp over the hammock to shield me from the nights’ rain.  I lay motionless. I could feel my knife on my right hip, my can of wasp spray above my head, and my heart pounding heavy and hard.  The steps, which sounded like more than one being, were slowly getting closer; I remained still.

As quickly and silently as I could, I unzipped my cocoon of down and reached for the wasp spray.  My hammock, the ENO JungleNest, has the No-See-Um netting; I would have to unzip the mesh to use the spray, or the damage would be done to me. 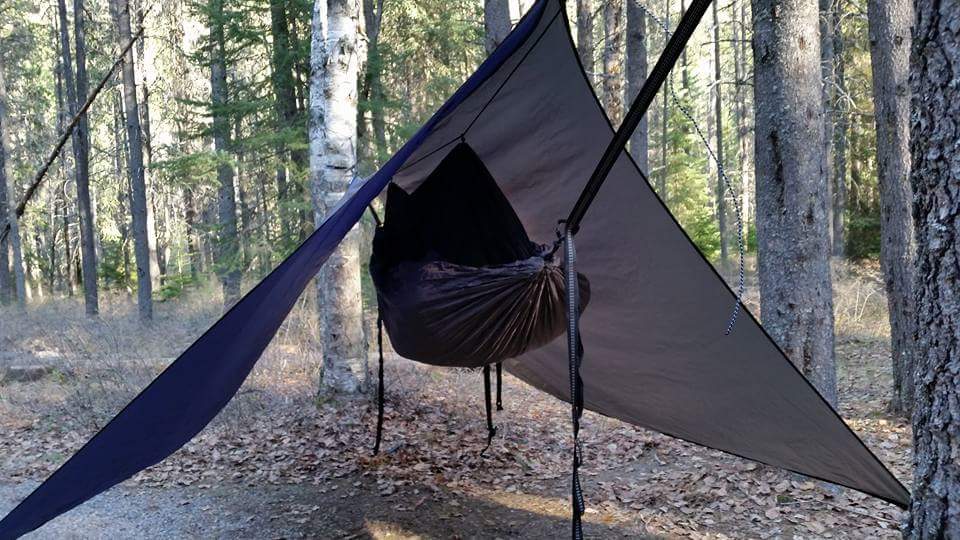 The footsteps were right on the other side of the tarp, and as my eyes strained to see the figure, it took one more step towards me.  I could see the shadow of thin, long legs.

Dawn’s first red glow had begun, allowing me to see his feet; they were hooves, four of them.  My early morning visitor was a deer, who was so close I could have touched her if it weren’t for the tarp.  I’m not sure who was more startled at this point, but I know I scared the crap out of her when I touched the tarp, and she took off.

I continued to lay in my warm cocoon, swaying back and forth, thinking about how I didn’t want to get up.  It rained all night, I was comfy and dry, but still, It.  Rained.  All.  Night.  My stomach started talking to me, letting me know it was once again time to, “Feed me!”  My lazy morning was over.  I was dreading packing up the wet gear again, then I remembered, it was my birthday!  I wasn’t going to cook over a fire this morning, I was going someplace warm, dry, and have a huge meal I didn’t have to prepare and clean up after.

Thompson Falls, Montana, is another gem of a town, with a population of under 1500; I knew I would be able to find a great diner or cafe for breakfast.  I found Minnie’s on Main Street, and by the abundance of vehicles, I knew it was a town favorite.

As I stepped into the packed cafe, a gentleman sitting at the counter turned around and said, “Sit anywhere you’d like, honey.”

I found a booth towards the back; I didn’t want to be bothered. I wanted to enjoy a fat boy breakfast and a flowing river of coffee.  I had been drinking hot tea every morning while camping, as I didn’t want to keep cream and sugar on hand.  I was enjoying the continuous flow of coffee, and drinking so much of it that the waitress left the pot on my table.

My meal arrived, and my mouth dropped. “Uhhhh, this is two or three meals,” I thought. 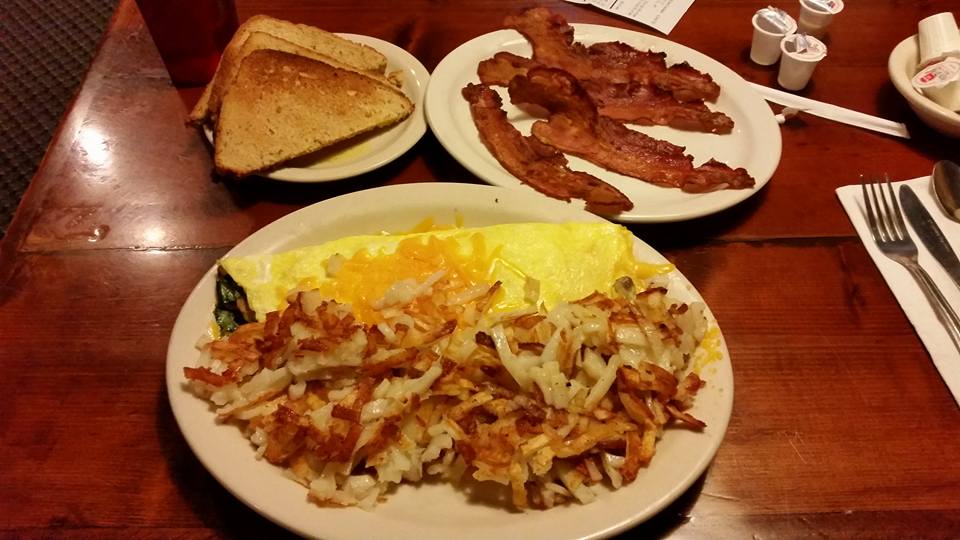 With a full tummy, huge caffeine buzz, and two to-go boxes, I hopped in my vehicle and continued north on Hwy 200. 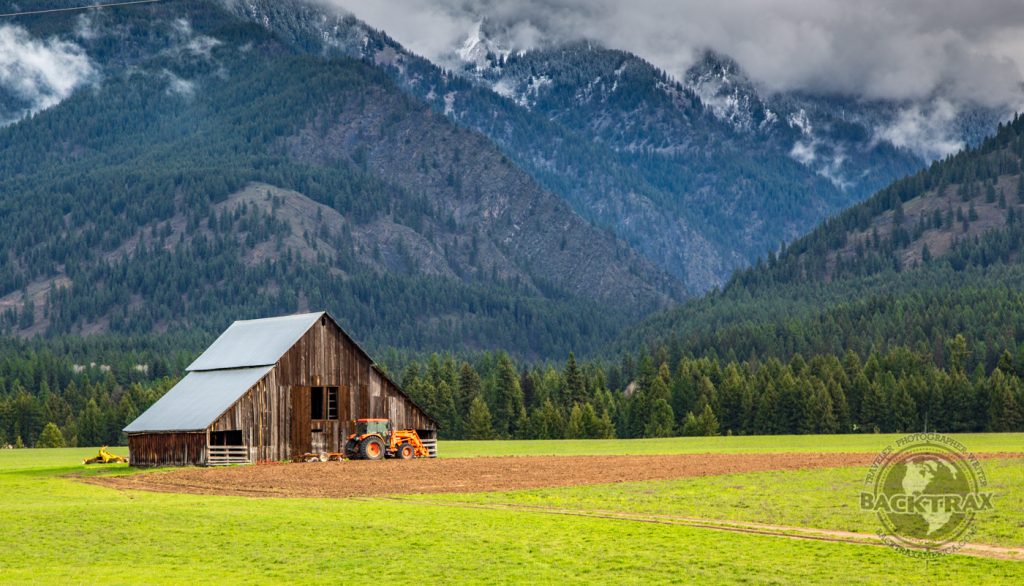 With no destination in mind, I just drove, drinking in the beauty Montana was laying before me.  Just past Noxon, I turned right, heading north on Hwy 56, where I came to the Kootenai River.  The river was the same blue/green as I had seen the day before.  As I rounded the corner, I saw a sign, Kootenai Falls, and Swinging Bridge. “OK!,” I thought and pulled in.  The short stroll through the forest was beautiful, and you could hear the screaming river in the distance.  Around another bend and there he was. 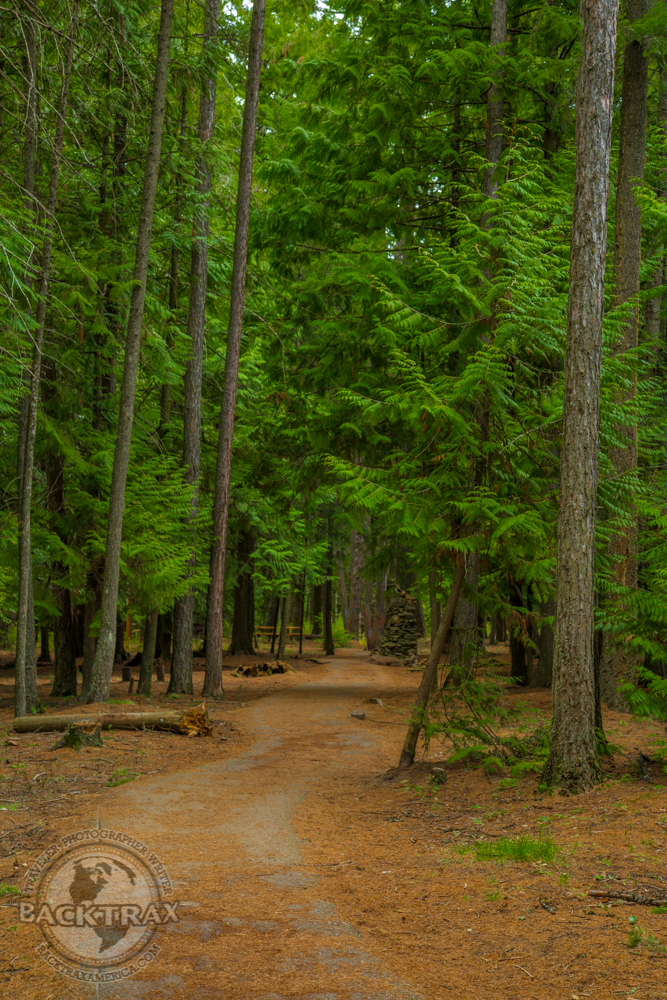 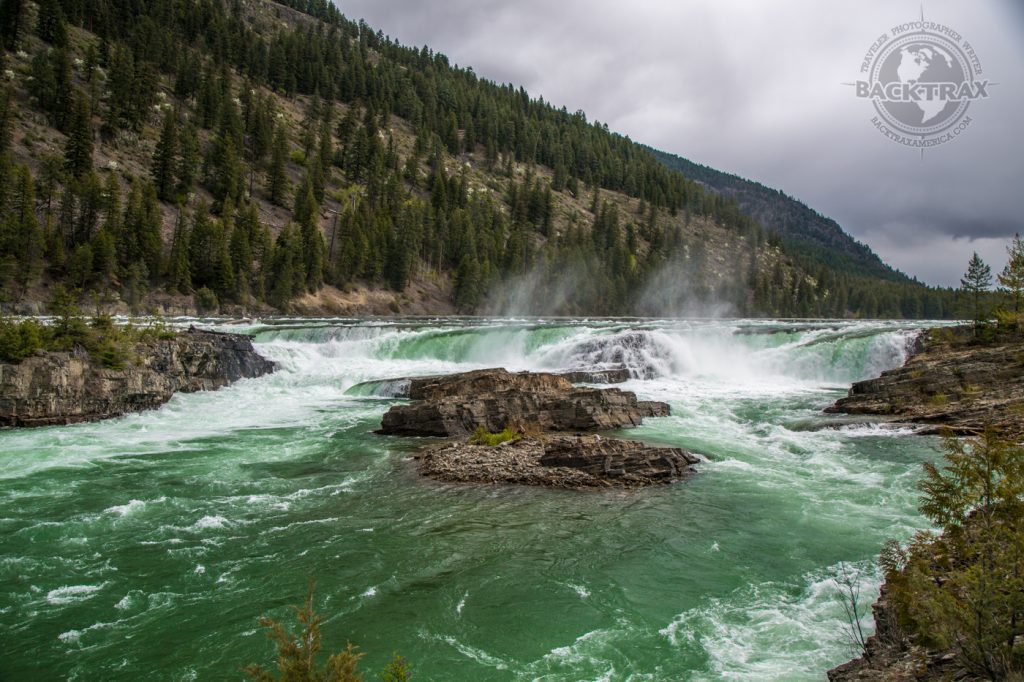 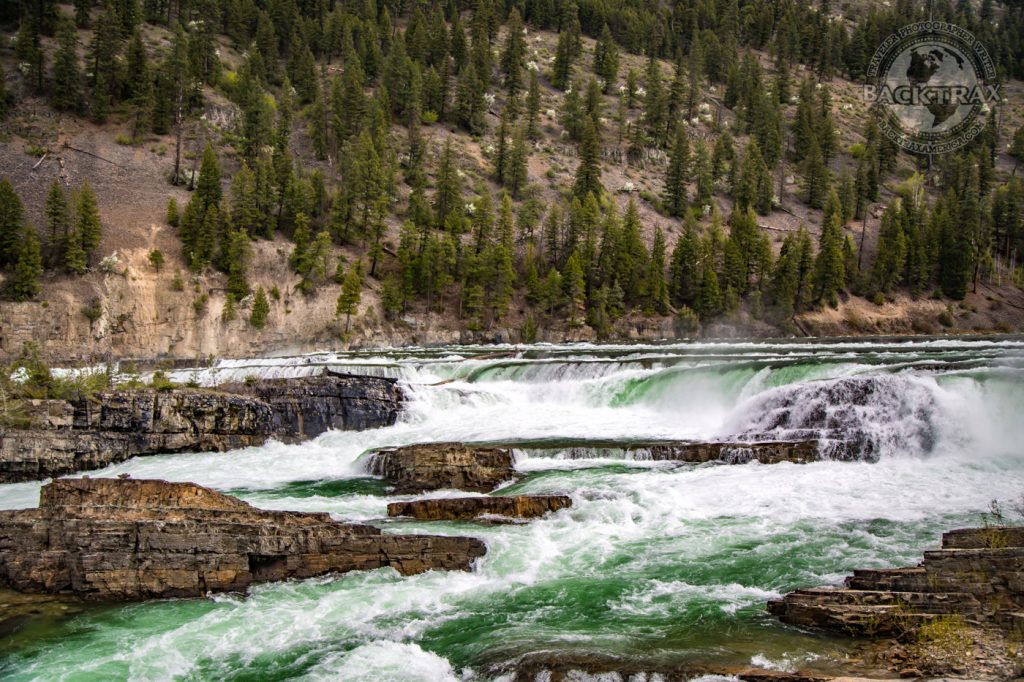 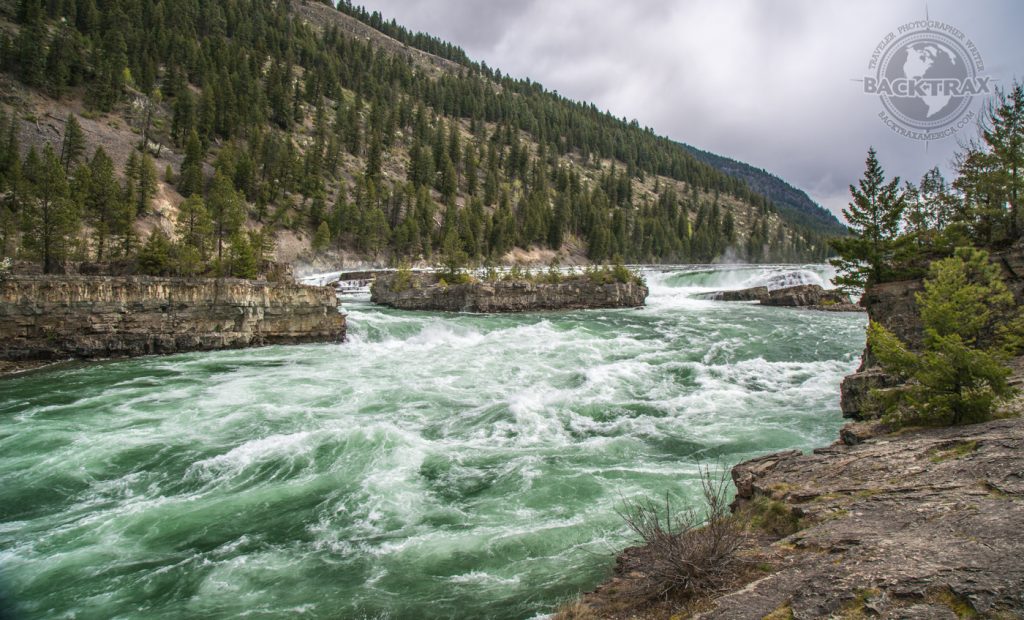 Seeing as it was my birthday, and all things are possible on one’s birthday,  I headed to the Swinging (screaming) Bridge.  Now, I’m not a fan of heights, and yes, I have been skydiving, and I climb crazy mountains, but this, this is different. 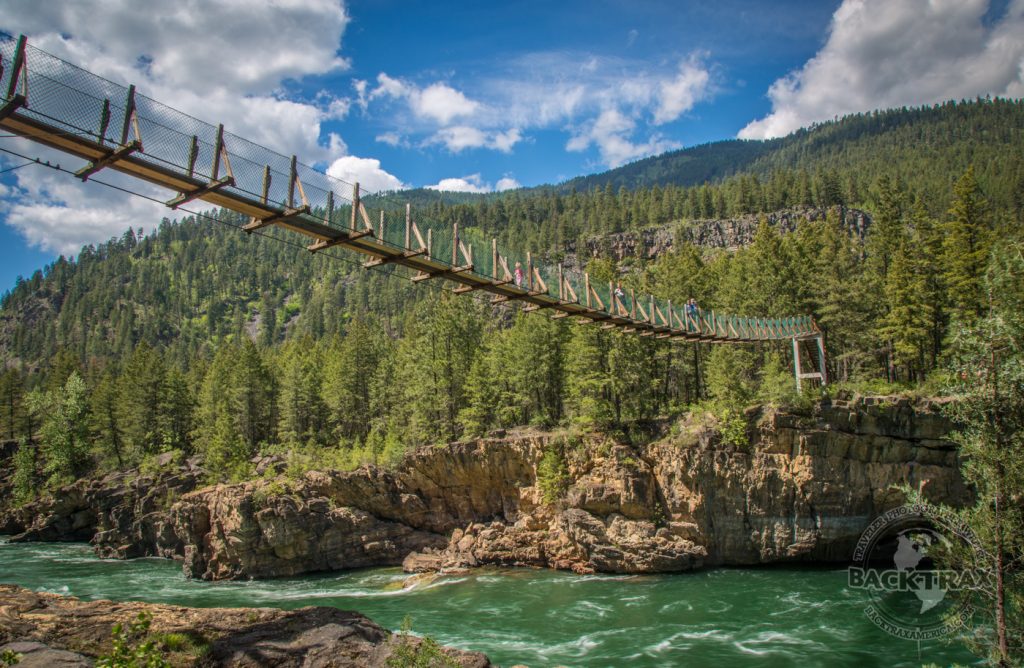 I climbed to the bridge, put one foot forward, and the bridge started to sway.  I took a deep breath, held it and put another foot forward.  My heart and mind started racing, thinking of every possible way of dying while on this screaming bridge.  How long before by body would be found?  Would I even be found or would I be devoured by the bears?  What would my boys say? “Yup, that was our mom; she died doing what she loved, being on an adventure.” I didn’t make it 10′ on the bridge before I s-l-o-w-l-y turned around and slithered back down to solid ground.  That was enough excitement for one day.  Come on!  Give me a break, I certainly didn’t want to die on my birthday! 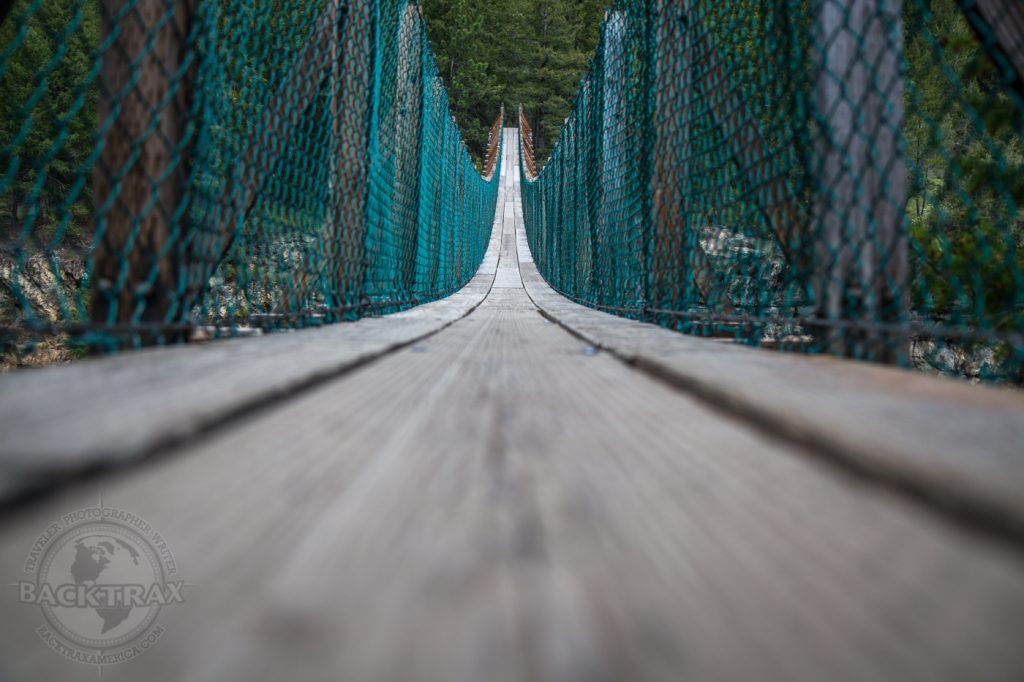 In Libby, Montana, I took a left onto Hwy 37, which hugged Lake Koocanusa.  When I came to the crossroads, I realized I was a mere 6 miles from the Canadian border, but decided to wait, and turned right towards Eureka.  The drive was beautiful, but it was getting late, I needed to find a place to set up for the night.

Whitefish Lake State Park was the closest park that was open, so I stopped.  As I was getting a fire started so I could cook dinner, it began to rain. COME ON!!!!! Can I have just ONE day without rain?!? PLEASE?!?

I got in my vehicle, pulled out my phone and miraculously had cell service. (A novelty in most areas I’ve been thus far in MT.  Not complaining, it’s been rather nice not being 24/7 accessible.)

I found the Hidden Moose Lodge in Whitefish, MT., and discovered when you are in a ski resort town when ski season has ended, you can score some sweet deals.  I booked the biggest, most luxurious room they had, the Big Sky Room, and decided to stay for two nights.  The room included made to order breakfast, which was phenomenal, and a cocktail hour in the evening.  The second day at the lodge I got out of bed only for breakfast and to put more wood on the fire.  It was worth every penny. 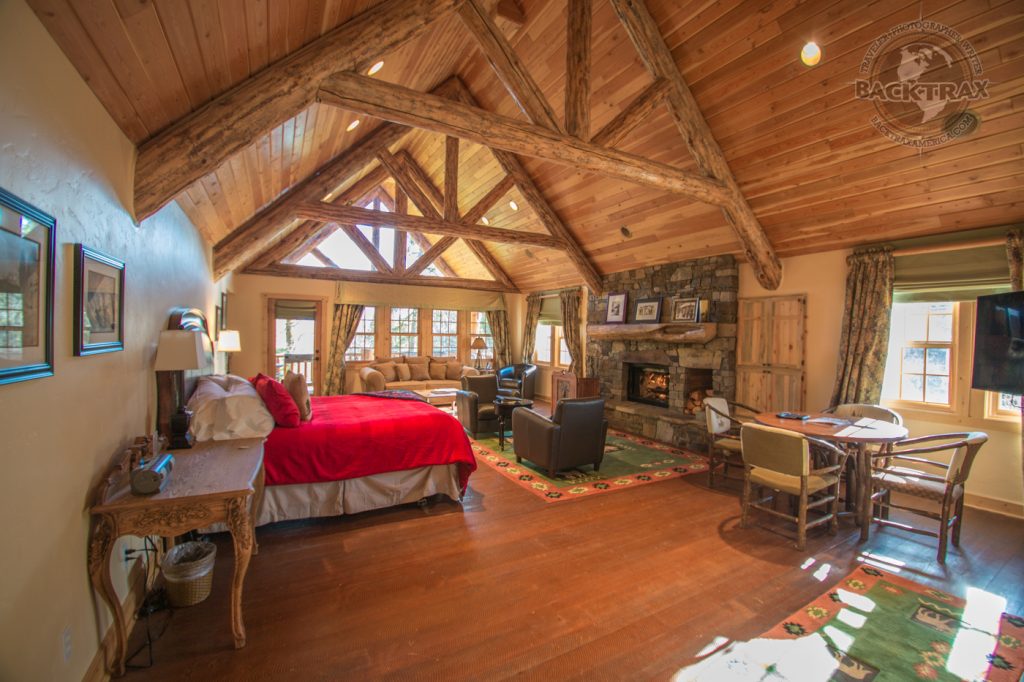 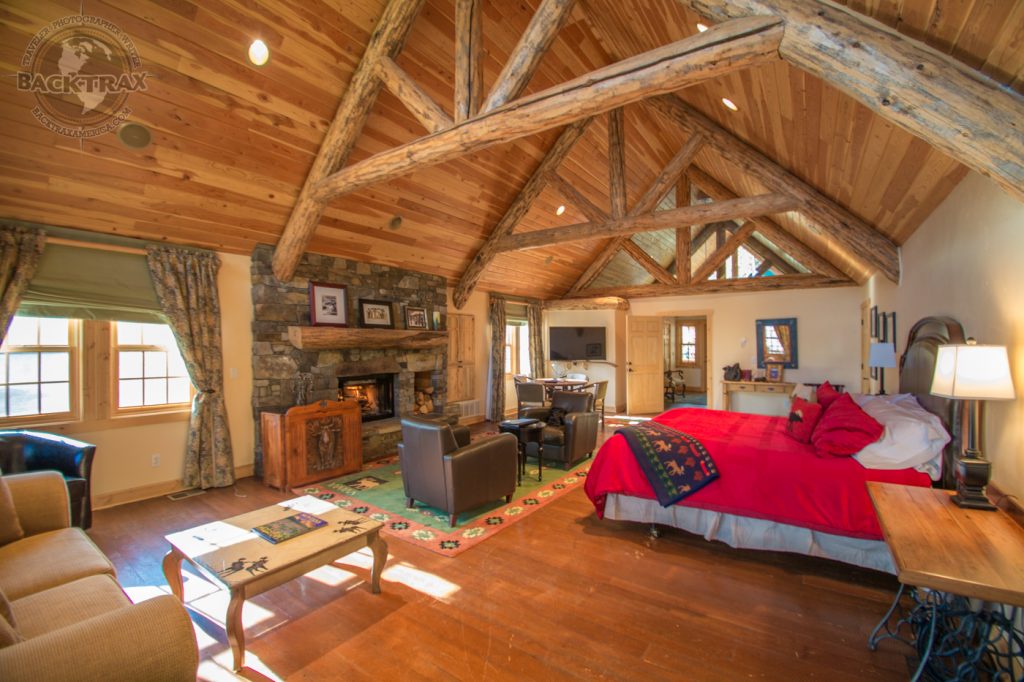 Travel tip: Don’t be afraid to ask if there are any deals or specials when booking a room, you never know unless you ask; and like me, might get an incredible deal that will make you stay an extra day!