I pulled onto a side street off of Hwy 431 in LaFayette, Alabama, to look at the map.  When I saw where I wanted to go, I placed the map on the passenger seat and out of the corner of my eye I spotted a purple monster.  I put my car in drive, and at a snail’s pace I inched my way forward, staring in disbelief.  To my left stood a historic Victorian home painted purple with pink polka dots safety orange window casings and bright yellow trim.  My first thought was a child daycare, but I had to find out. 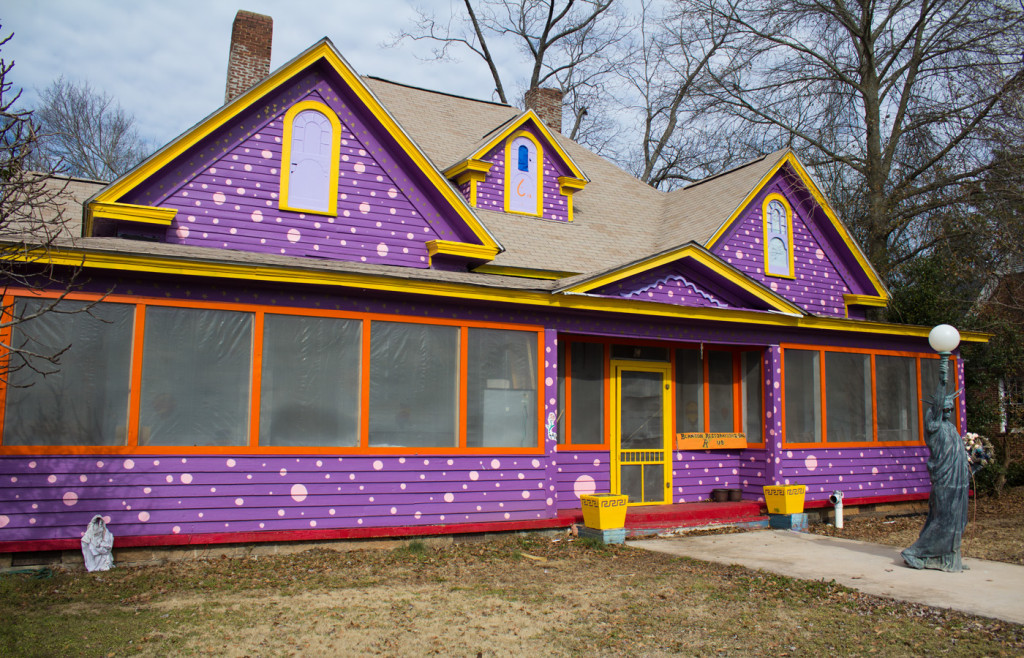 I knocked on the door and heard a pack of dogs start their welcoming call.  A few seconds later Chuck and Vicki Blanton welcomed me into their home.  A couple of steps into this magnificent building I was greeted by 12 dogs, most of which were rescue dogs.  They were super friendly and very well-behaved.

After a few minutes of the dogs getting their sniff on I asked the only question I had at  the moment, “Why did you paint your house purple….with pink polka dots….and orange and yellow trim?”

As we settled into our seats in the kitchen, Chuck told his story…

“When I bought this house in 1984, reputedly being an old home restoration expert, the ‘little old bitty committee’ welcomed me to the neighborhood with open arms knowing I would save it from its progressing decline.  Restoration aside, they weren’t impressed with my idea of yard work which occasionally involved a bulldozer.”

One neighbor in particular named Betty, the Baptist preacher,s wife who lived a couple of doors down took her annoyance one step further.

“One day she wrote a snippy editorial to the LaFayette Sun thanking the mayor and City Council for enforcing the property maintenance ordinance.”  She wrote, “Junk cars belong in the junk yard, not on the front lawn nor on the back lawn; and a certain firm advertising restoration needs to restore its own home to its former beauty and order so its advertising will be credible.”

“They had badgered me for nearly ten years , yet when I read that my initial reaction was still one of public humiliation, face flushing red….  That lasted for about three seconds.”

“We were painting my lawyers home about three blocks away,  and by the time I got there after reading that snippy editorial, red was no longer in the picture.  In fact the first thing I said to my guys upon pulling up was, “Load ‘em up Guys, we’re gonna go paint my house purple with pink polka dots!”

Of course his guys thought he was crazy, but by 5:00 that afternoon they had everything they needed and were ready to paint.  By 8:00 that evening the house was finished. (Just the front and left side are painted.  He’s on a corner lot and it’s called curb appeal!)  This was September of 1993. 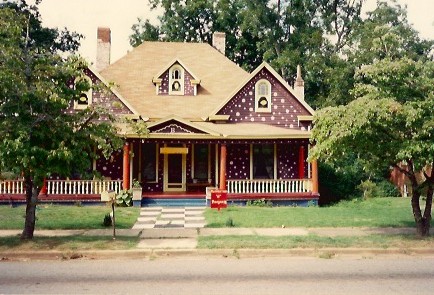 That same evening friendlier neighbors, Louise and her husband, Sheriff Morgan, were sitting at the dinner table reading the LaFayette Sun.  Louise said, “You know James, Chuck’s not going to take this lying down.”

The following morning Louise walked outside and looked over in Chuck’s direction.  There on the front lawn stood Chuck, waving, his purple house with pink polka dots and orange and yellow trim behind him.  Louise broke out in laughter.  The Sheriff helped spread the word!

For a solid month people were coming in off the interstate to see the purple house with pink polka dots.  Chuck thought he would be tarred and feathered by the community, but people thought it was hilarious and so it continued.

Chuck and his house got more attention than he thought he deserved.  The Auburn/Opelika newspaper contacted him, did a write-up and put it on the front page of the Sunday edition.  Channel 9 Action News did a segment. Then CNN got wind and they did a segment.  A Japanese television station called Chuck and wanted to fly a crew over to film him painting his house again! Over the years, The Globe, The Sun, and various European tabloids did write ups. “You know, ‘Alien boy who paints his house purple with pink polka dots.’”  Montell Williams even flew him to New York for the Hatfield and McCoy’s 100th anniversary of their infamous feud.  (And to think, I thought I had simply found a small town story. Phffffft!)

Not everyone thought this was funny.  “Sweet Katherine,” from across the street was fuming!  “She was the City Managers wife,” Chuck said. “She had a personal vendetta for 15 years to make my life miserable.  We’re buddies now, we laugh about it.  Only because she realized I’m not the demon from hell and when needed, I’m actually a pretty good neighbor to have around.”

For Halloween in 1993 he painted the house black with orange pumpkins and flames coming out of the gables, followed by a Gingerbread theme for Christmas. 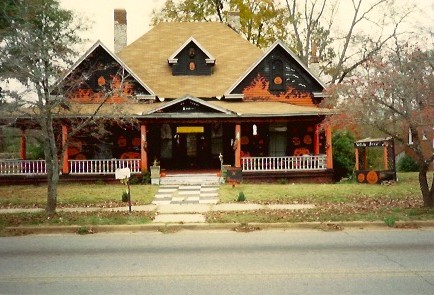 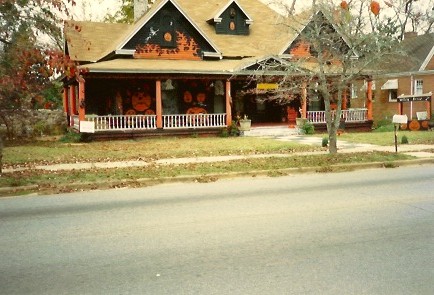 September 1994, Katherine threatened to sue the city for issuing Chuck a business license.  Chuck got wind of this.  He painted his house beige.  Betty, the preachers wife happened to walk by while the painting was in progress.

“You’re not finished with it are you?”

He finished it off with camo, winning the favor of many a good ol’ boy and local hunters.  A local newspaper ran the picture with the headline “This Means War!”  But it didn’t, claimed Chuck.  “Shoot, I was just trying to blend in,” he said grinning. 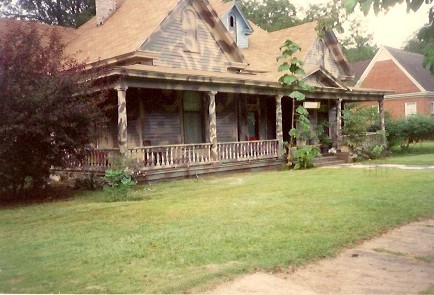 For Valentines in 1995 the house gets painted pink with red hearts.  On one gable he writes, “Roses are red, violets are blue,” and on the second gable he writes, “Love conquers anger, now what shall we do?”  Across the front he wrote, “Thou shall love thy neighbor.” 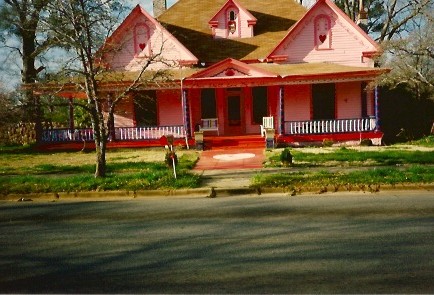 Spring of 1995, a Spring theme was painted, and spectacular it was. 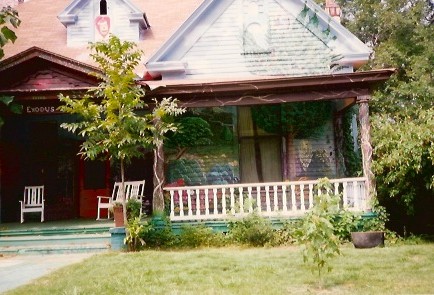 June of 1996, the house was painted white.  July 1996, red and blue were added along with the statue of liberty. 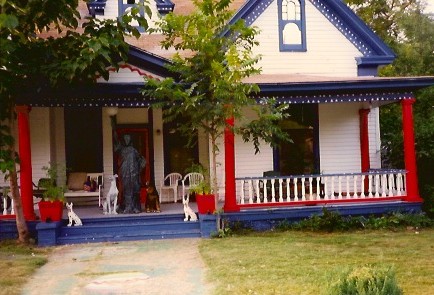 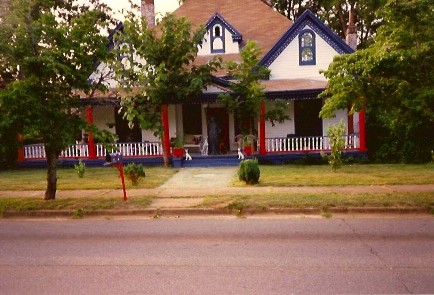 In November of 1998, the red and blue accents were painted orange.  A friend from the Netherlands was coming for a visit and the Dutch Royal Families name was Orange-Nassau.  With tulips and windmills painted on the house, their friend felt very welcome. 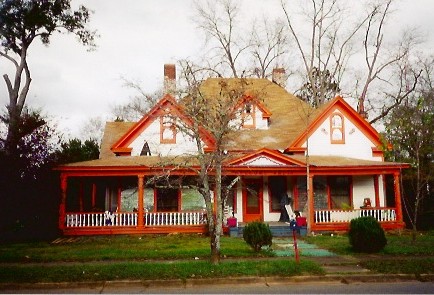 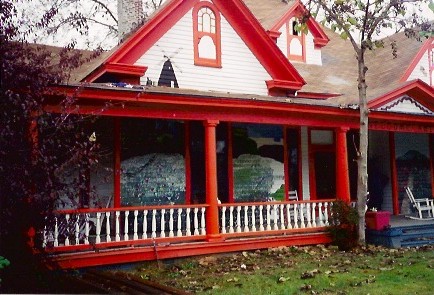 The year 1999, brought out the “101 Muttations.”  The house was painted white and then cartoon animals were painted all over the house.  “Someone” had poisoned three of his dogs, so in honor of his fallen canine buddies, he painted his house with animals. 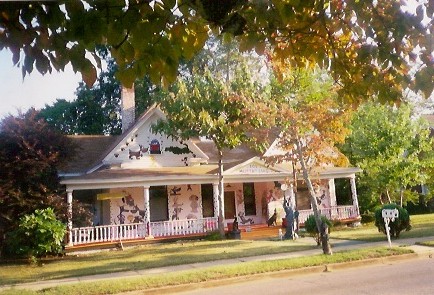 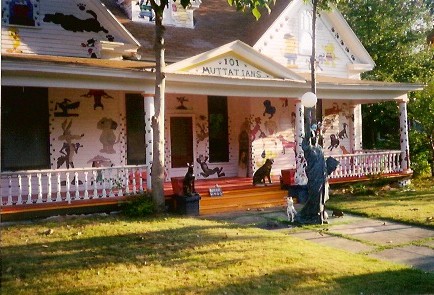 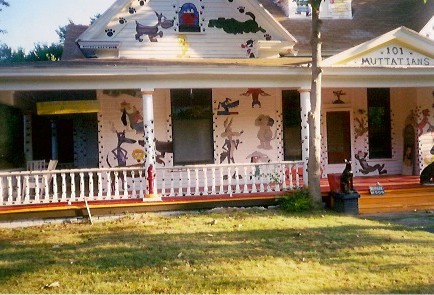 Over the last twenty years his house has been painted 12 or 13 times, all with different themes. 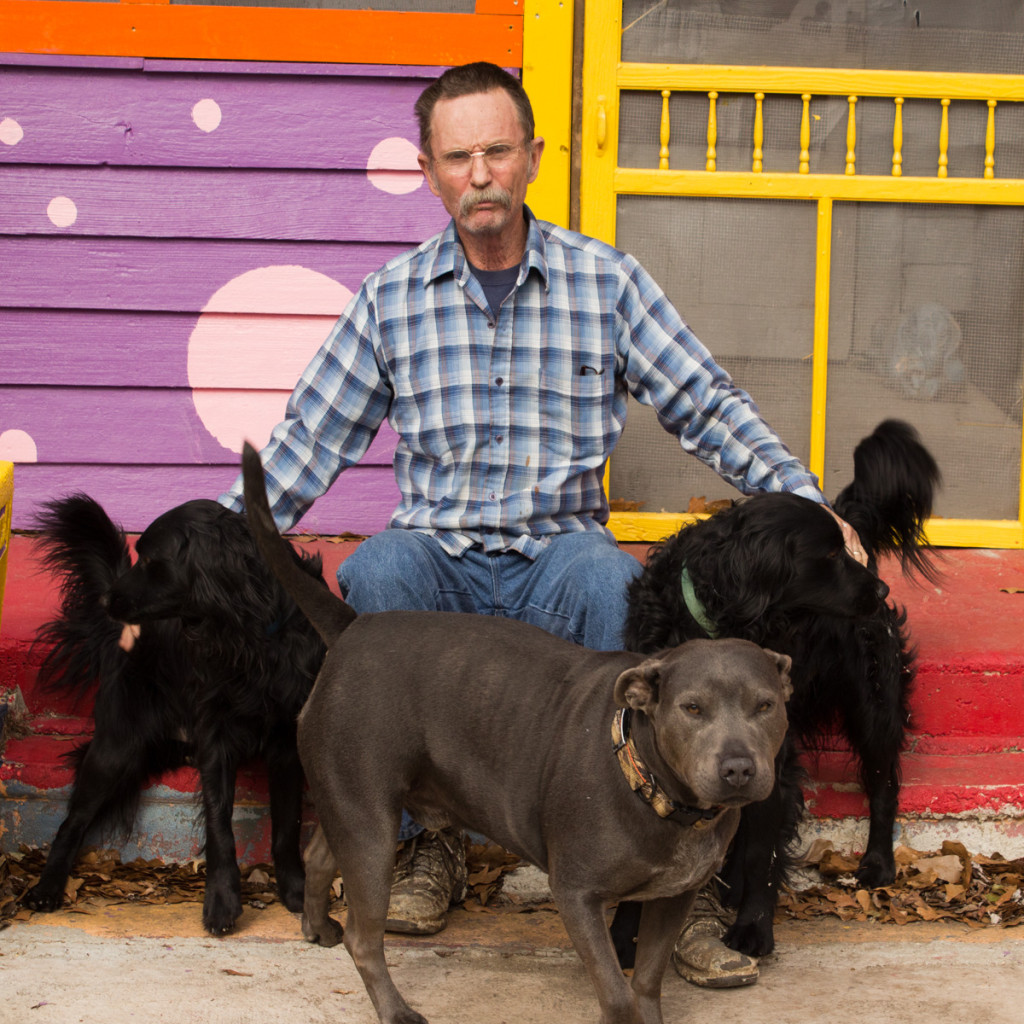 August  2013, was the 20th anniversary of the purple house, so he painted it purple again along with the pink polka dots and orange and yellow trim.  Next time I’m passing through I will stop by to see the current choice of colors!