Back in the hills of southern North Carolina lives a women named Liza. Liza is a farmer but, not a farmer of ground crops, she raises Alpacas. 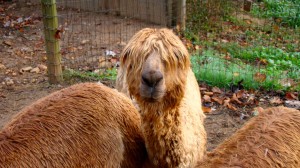 In the year 2000 Liza’s husband died and left her with three children. At the time she had a “suit” job, and on one particular morning her youngest daughter was sick. On the way to work her daughter got “sick” all over her suit, and that was the breaking point for Liza. She walked into the her bosses office and said she couldn’t do this anymore. She needed to figure out what chapter was next in her life and quit her job. 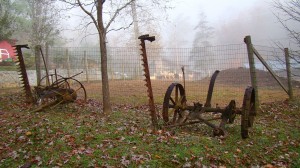 After a little bit of research on Alpacas, she bought some land with a small house, rented out her house in the city and moved her kids to the small town of Otto, North Carolina. 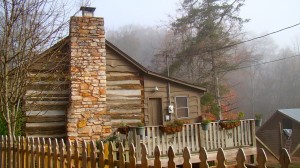 “Alpacas of Merritt Farm” was born! Liza said, “It was the fiber” that got her hooked.  Alpacas fiber or fleece is similar to sheep’s wool but, it is warmer, not prickly, and has no lanolin, which make it hypoallergenic. The fleece is also naturally water-repellent. 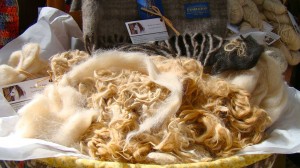 Alpacas were imported from Bolivia to the US in 1984. The Alpacas that Liza raises are the Suri Alpacas. The difference being the type of fleece. The Suri fleece is silky and resembles pencil-like locks where the Huacaya fleece is dense, crimpy, and gives a wooly appearance. The Alpacas get shirred yearly in May after the last frost, and the fleece gets separated at shirring according to the length. Liza admits she is nowhere near being an expert on determining the micron of the fleece, and just in case her “touch” is off she uses a fiber board to determine the micron. The length, micron and color determines where the fleece ends up for processing. 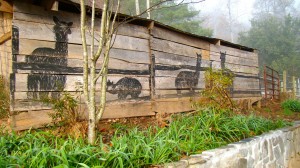 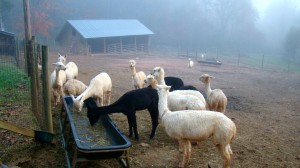 The most common color for an Alpaca is “natural”, or oatmeal as I like to call it and it can be dyed. Liza has a few black Suri Alpacas which are rare and one that is a burnt red color. She said she keeps the red fleece for herself and I don’t blame her! I would also! There are a total of 34 Alpacas on her farm now and she started out with only four. 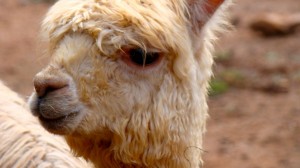 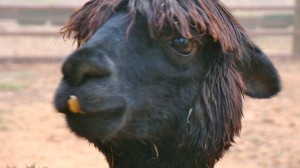 When the shirring takes place Liza also does the “herd health”. The Alpacas get their shots, worming medicine and they get their feces tested. I mentioned that I thought Mike Rowe with Dirty Jobs did a show on the shirring of Alpacas and Liza laughed. She said Mike didn’t get nearly as dirty as you get on the day of shirring. She said it is the hardest day of the year for her. We then walked to where the hay and feed is kept and  I admitted I didn’t know anything about hay except a cute joke, so she explained to me about the quality of each. 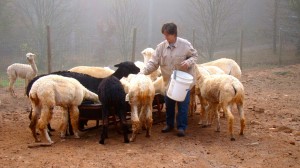 For a small farm like hers, it all boils down to the cost of things. She realized early that spending the extra 4-5 dollars per bag of better feed meant she didn’t have to spend the extra money on vet bills when the animals got sick. You could tell the quality of the hay in the barn was even top notch and she taught me how to tell the difference. The organic feed was developed in Virginia for her herd, and she had total control over the nutrition that is put into the feed, and that varies from season to season. 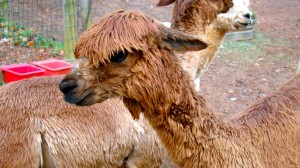 The farm starts with the animals and the animals in turn support other things that Liza does on the farm. She “grows” compost and sells it by the pound in 5 gallon buckets. If you bring the bucket back, you get $3.00 off your next purchase of compost. And let me tell ya, she sells A LOT of compost. I know a little about compost and it was pretty. All the money she earns from the sale of the compost gets donated to charity because she believes in giving back. 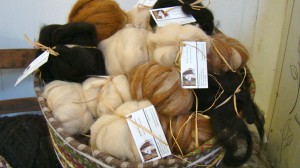 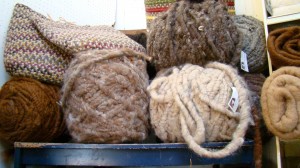 Through her website, www.alpacasofmerrittfarm.com you can purchase various items. She sells the yarn for knitting or crocheting, balls of fleece to make rugs, mittens, socks, gloves, hats, blankets, and scarves to name a few items. I bought a pair of socks and a hat. They are the warmest socks I have ever had, and my new favorite for wearing with my hiking boots! They are warmer than wool without the itch. I will be sending her a check for a couple more pairs of socks and the yarn that matches my hat so I can knit a scarf. 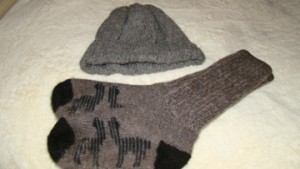