Anyone who knows me, knows I love cheese.  When a recipe calls for cheese, I don’t measure, I dump it in by the handful.  The cheesier the better is the way I see it. (My boys disagree.)

Legend has it that thousands of years ago, an Arabian trader was crossing a rough, mountainous section of Asia. After many hours of torturous climbing under a hot sun, the tired traveler paused to refresh himself with dried fruit and goat’s milk. As he lifted the canteen, made from a dried sheep’s stomach, to his lips, only a thin, watery liquid trickled out. Curious, the Arab cut open the skin to see what happened to the goat’s milk he had originally poured into it. To his surprise, he found a soft mass of curd. The rennet in the partially-dried sheep’s stomach had curdled the milk, and the result was cheese.

In the Kettle Moraine area of Wisconsin, lies a small town named Theresa, and one family in this town produces something no one else can.  A true “Brick” cheese.

“What is real Brick cheese?” you ask. Brick is an American original.  It was developed in 1877 by John Jossi, a Swiss-born American cheese maker. Jossi came to America in 1857 from Switzerland, with his parents at the age of 12. The family settled in upstate New York, but two years later young Jossi was running a small Limburger factory in the town of Richwood, in southwest Wisconsin.  If you didn’t get that, he was 14 and running a cheese factory.

During his time in Richwood, Jossi came up with the concept for what was to become Brick cheese.  He wanted a cheese that was made with curd that was drier than what he was use to.  And, he came up with the idea of using bricks to press the cheese, which of course was formed into a brick shape.

Jossi taught  a dozen other cheese makers in Wisconsin how to make Brick cheese before his death in 1902. 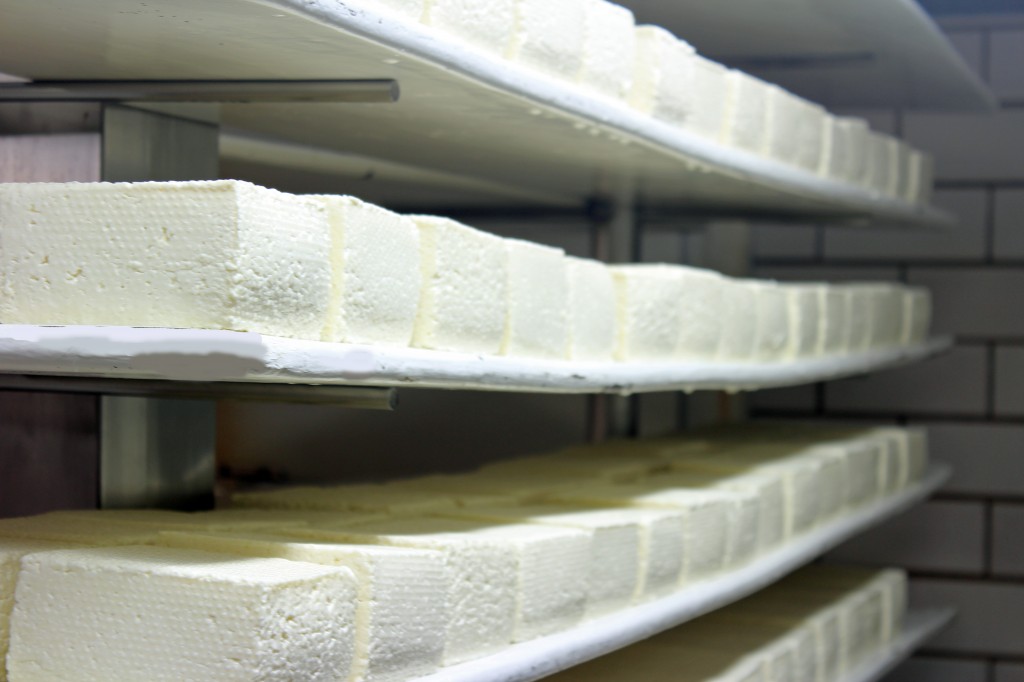 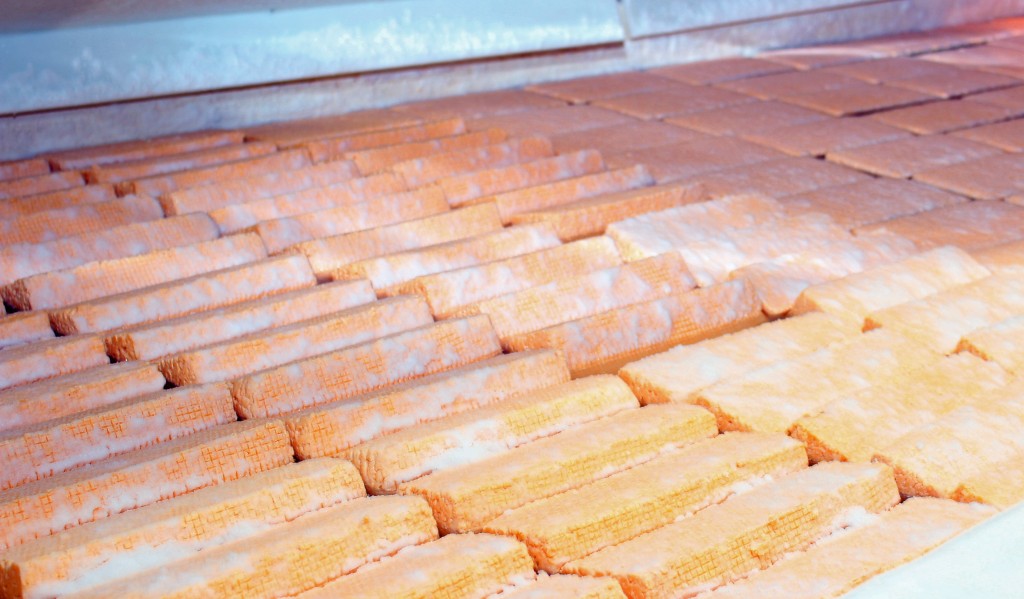 Cheese in a salt brine

Today, Widmer Cheese is run by Joe Widmer, a third generation cheese maker. He’s one of a handful of cheese makers in Wisconsin to have earned the title of Wisconsin Master Cheese maker, having completed a three-year advanced training program for veteran cheese makers. Joe has completed the course twice, earning Master certification in Brick, Cheddar and Colby varieties. 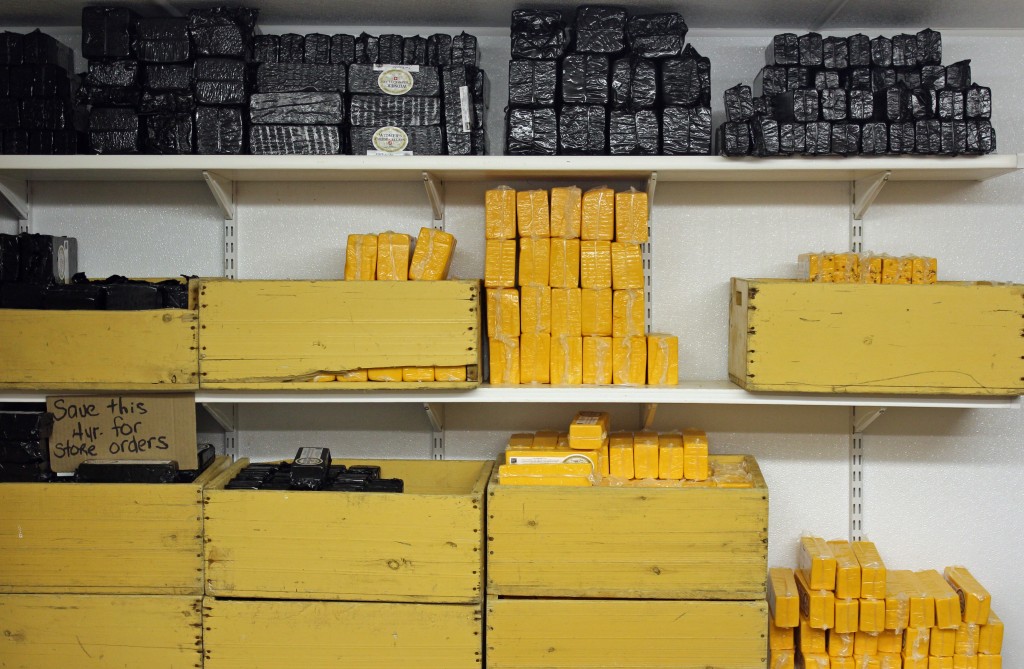 To make one pound of cheese , ten pounds of milk is needed, and Widmer produces 360,000 pounds of Brick cheese a year.

When I walked into the “store” I thought I had entered in the wrong door.  Right in front of me were men making cheese in the two large vats.  To my right was a line of people buying the cheese.  It did cross my mind for the briefest of moments to dive into the vat of cheddar. 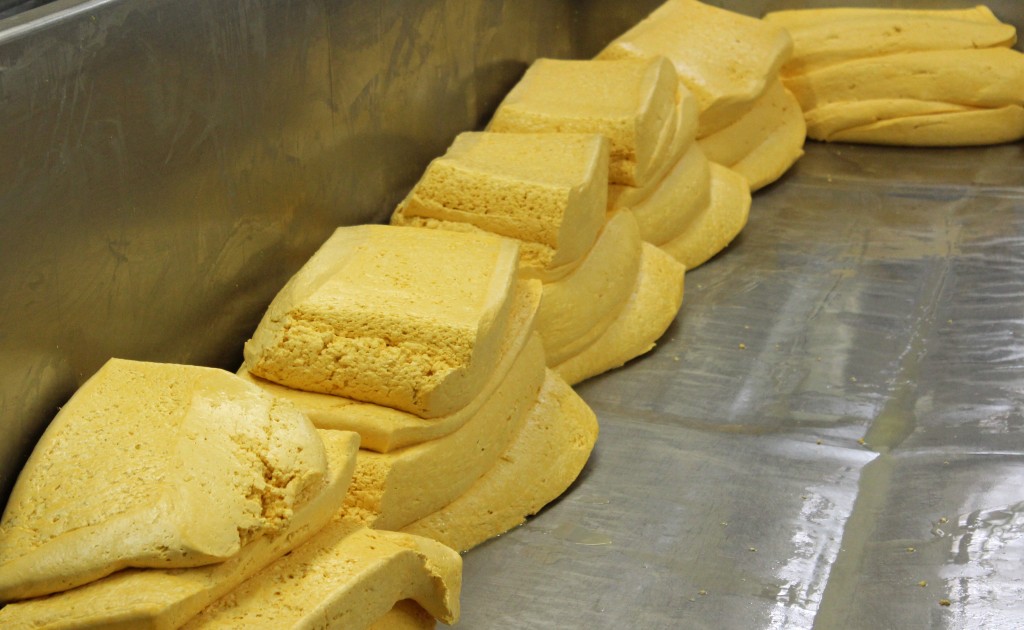 On a hanging shelf above one of the vats are the bricks used to press the cheese. Thanks to “grandfather clauses” that enable him to continue using his bricks, his open vats and his wooden curing racks, Joe is able to do things the way his family has always done them to produce great cheese.  Widmer Cheese is credited as being the only cheese maker still using bricks for their Brick cheese.

The next time you are in the dairy section looking for cheese, look for the Widmer name.  You know you are getting a cheese made the way  it was made a hundred years ago.