The Crazy Water marvel brought forth the need for more sleeping facilities, and the Crazy Hotel was built by a Dallas man, Carr P. Collins in 1927.  The Crazy Hotel featured 200 guest rooms, shops, a dining room, doctor’s office, florist, barbershop, bookstore, recreation department, drinking pavilion and a bathhouse.  This seven story hotel also had a roof-top garden and an enormous lobby where hotel orchestras and bands would play in nationally broadcast shows. 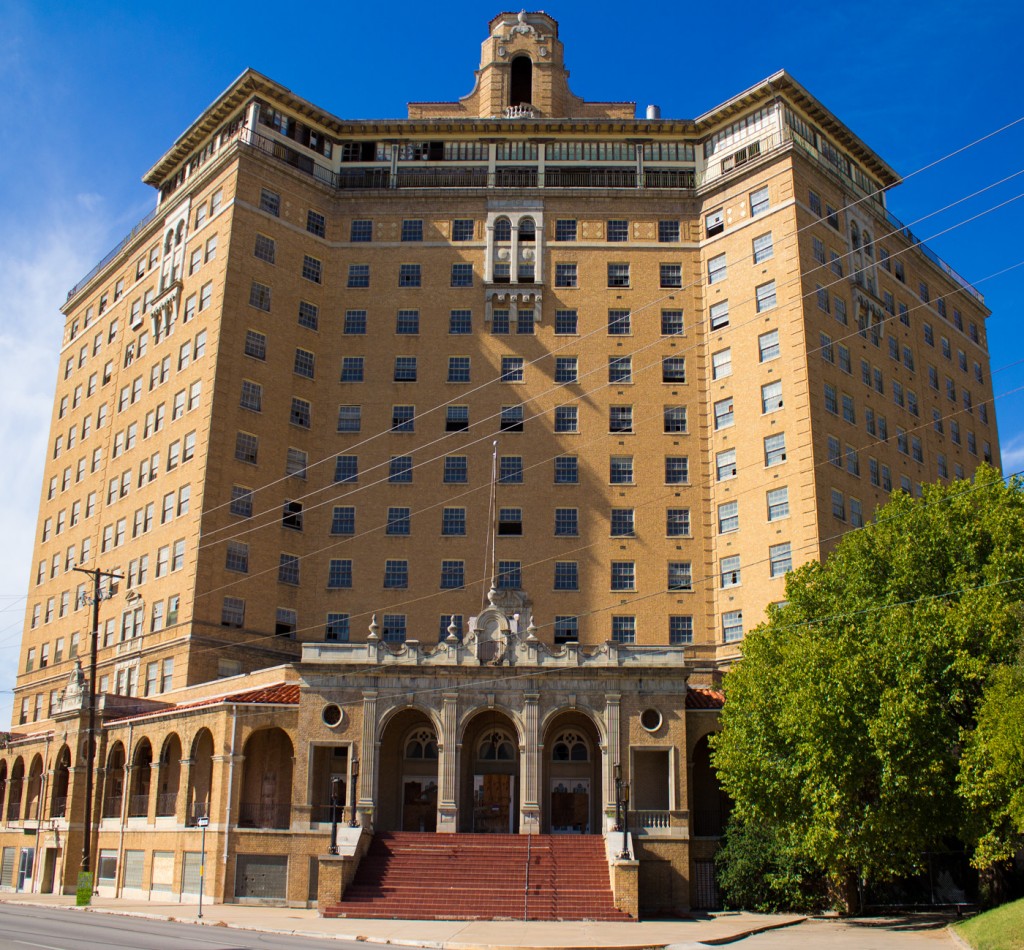 A group of Mineral Wells business men resented the fact that a Dallas man was taking control of the Mineral Wells hotel industry, and came up with the idea to build a hotel that would outclass the Crazy Hotel.  These men, with their grand hotel plans in hand, contacted Theodore Brasher Baker, a famed hotelier in Texas.  Mr. Baker liked the idea, and The Baker Hotel opened on November 22, 1929.  This lavish hotel featured 450 guest rooms, tennis courts, two ballrooms, medical clinics, shopping, a bowling ally, gymnasium, a beauty salon, drinking pavilion, outdoor pool (the first in Texas) and home to the famous Brazos Club.  One entire floor was dedicated to mineral baths and massages.  The Baker Hotel was built for $1.2 million and became known as the place “where cattle kings and oil tycoons twirled society girls to the sounds of Laurence Welk,” and many other bands.  If you were at The Baker Hotel, you were part of the “in-crowd.” 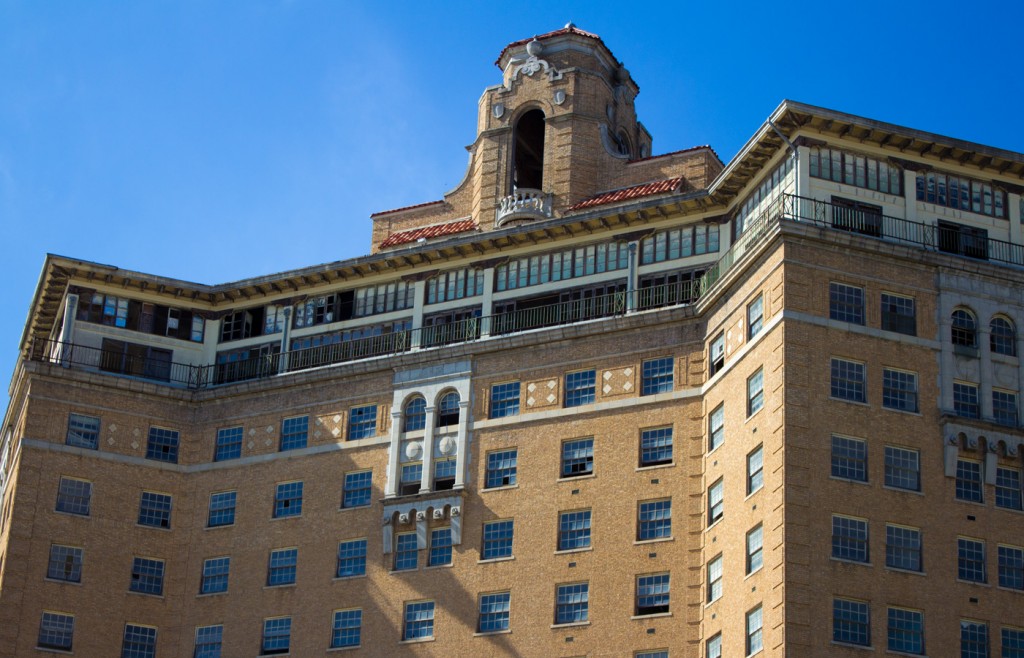 By the 1930’s the mineral water craze began to fade and in 1934 T.B. Baker declared bankruptcy and passed control of The Baker Hotel to his nephew, Earl Baker.  By the 1940’s, most of the water companies had closed down.  During World War II, gas was rationed and people could no longer make the journey to Mineral Wells.  The Hotel was now being filled by soldiers and their families. 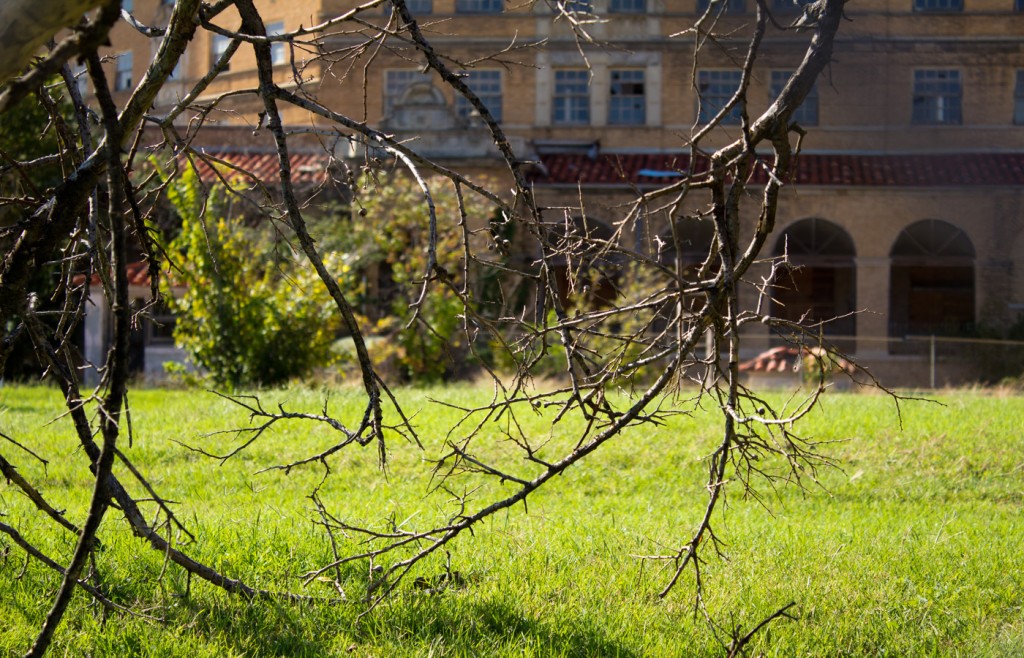 When the war ended, the hotel suffered again, along with other business, and Earl Baker knew what had to be done.  Mr. Baker decided if he didn’t have a buyer for the declining hotel by his 70th birthday, he would shut it down.  True to his word, Earl Baker locked the doors to the hotel in the Spring of 1963. 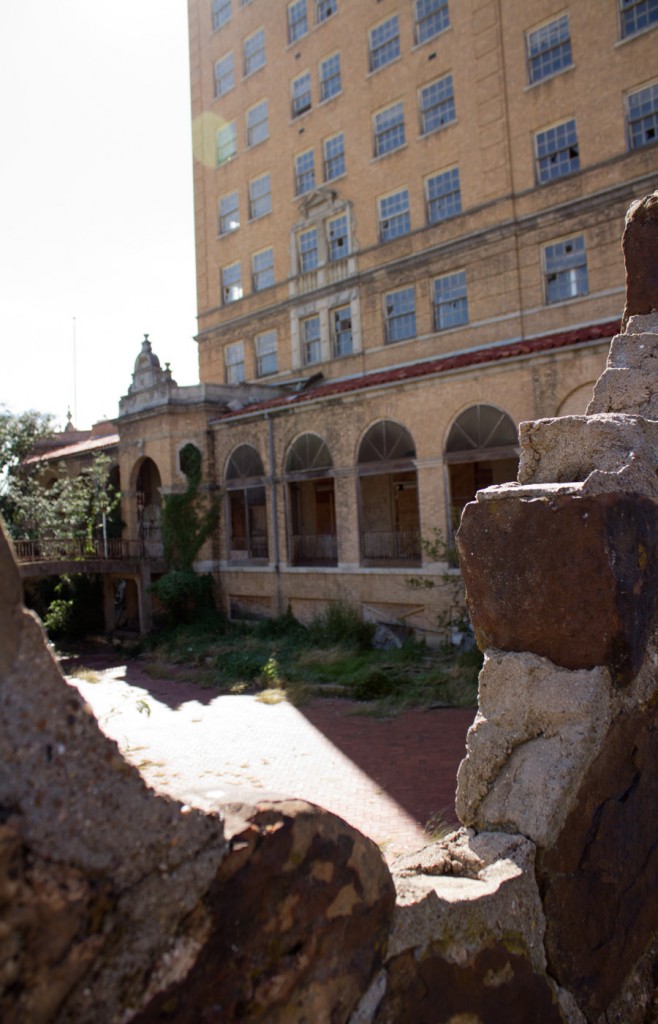 In 1965, a group of local businessmen purchased the hotel for $375,000, and The Baker Hotel was once again open for business. In 1967, Earl Baker was found dead from an apparent heart attack in the Baker Suite of the hotel, and in 1972, the doors were closed for good. 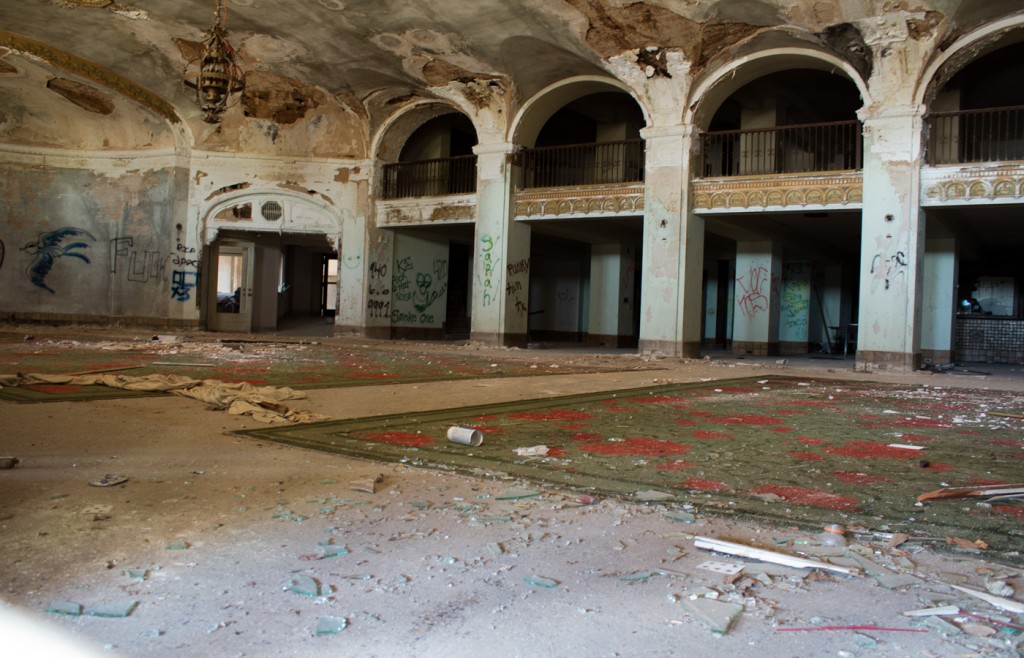 As I walked around the deserted hotel (literally around, I was not about to enter through a broken window. Well, not all the way through a broken window, just my camera was in the hotel.) and its grounds I could visualize children running around, splashing in the pool and fountain.  I could see women sitting on the porch, sipping their Crazy Water, and couples playing tennis. 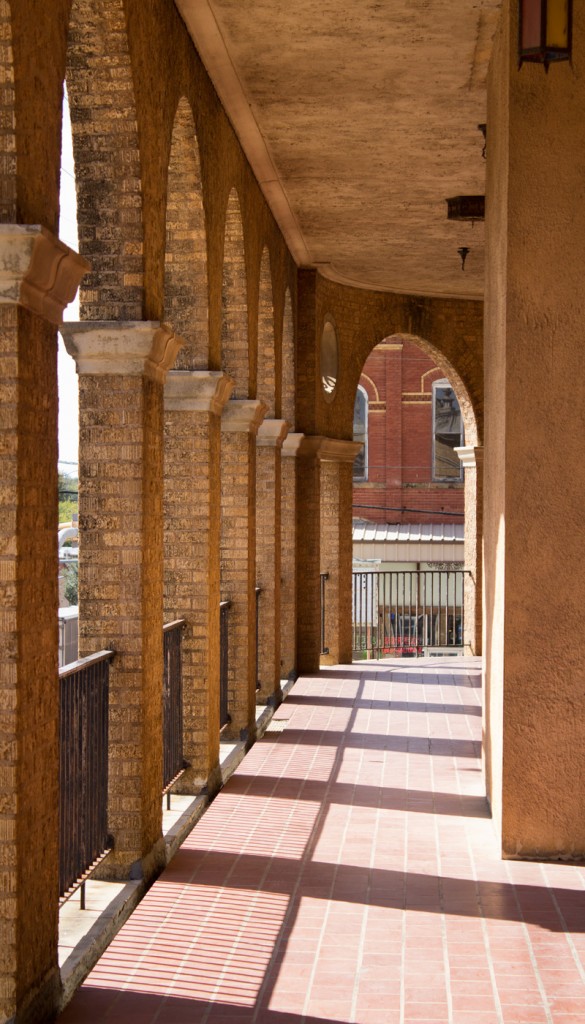 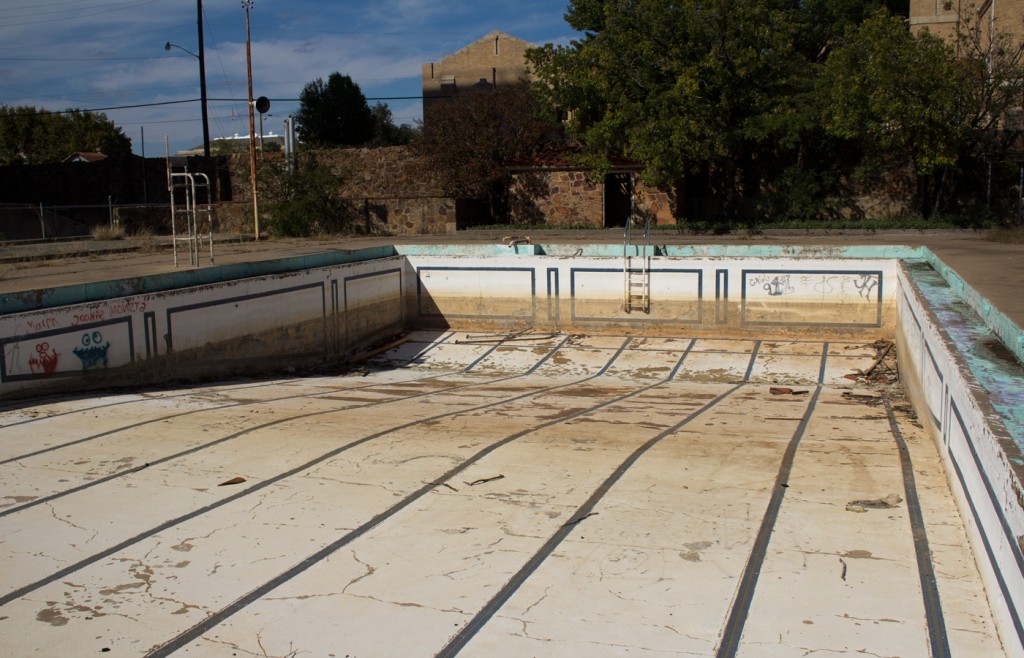 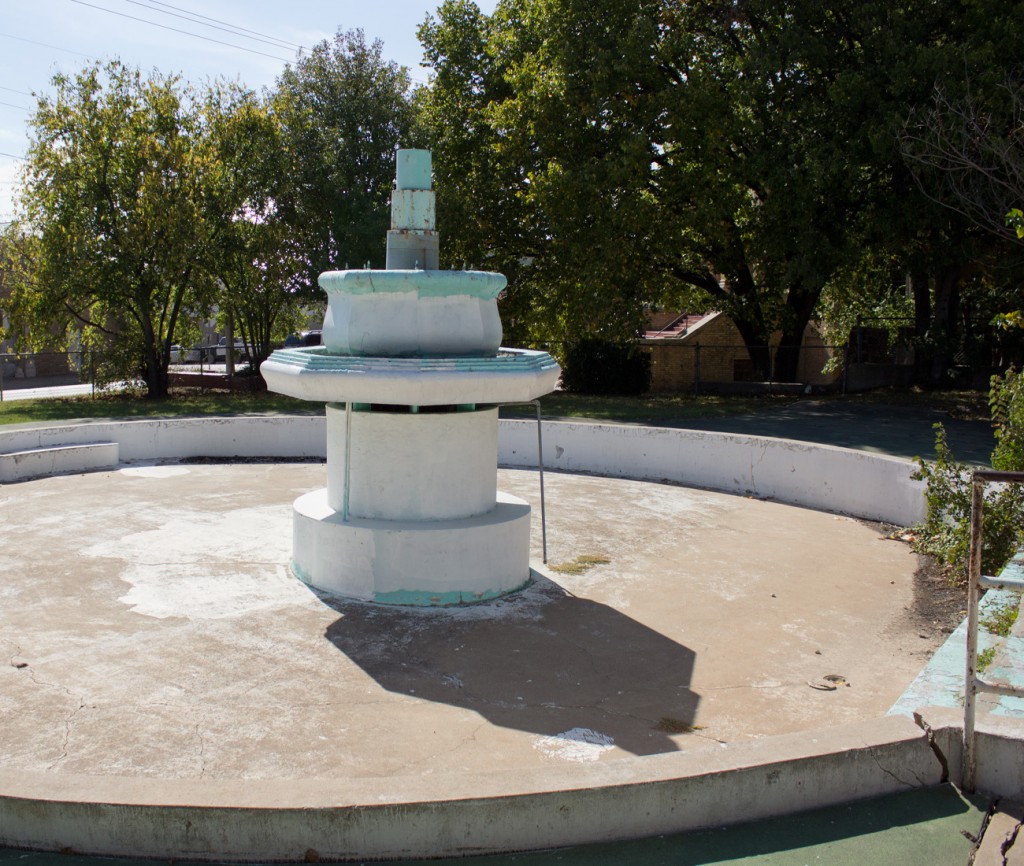 This inauspicious building needs to come back to life and a group from Dallas, Texas, the Hunter Chase Capital Partners, are trying to get the needed capital, to bring this magnificent building back to it’s once impressive grandeur.  If the renovation is ever completed, I, for one, will be occupying a room at The Baker Hotel, and sipping my Crazy Water in Mineral Wells, Texas.

If you want to learn more about “Ballad of The Baker,” click here.