Okay, the towns “real” name is McMahan and a few years ago was up for sale.  Tom Douple and his buddies were eating BBQ in Lockhart, when they saw the ad and decided to make the short drive to McMahan to see what all there was for sale.   They fell in love with the little town immediately, and between the four of them, they bought the town.  The clean-up process started and the town once again was coming to life. 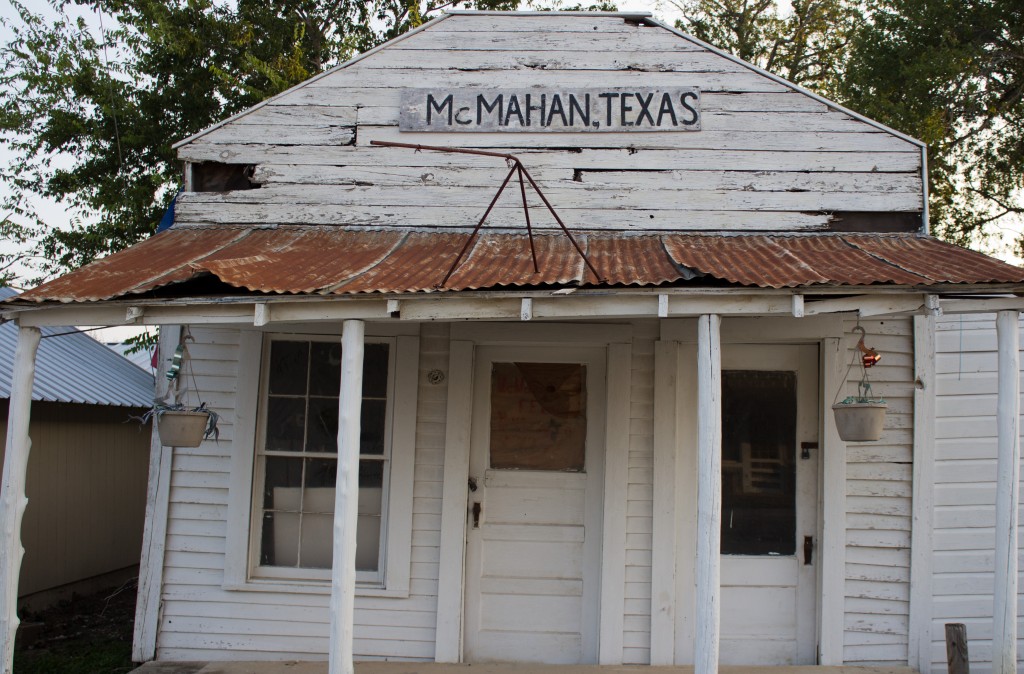 Long ago, this little town was without a name, but was about to acquire one. A saloon was built in the town and as you can imagine, it was a very busy place.  One of the frequent patrons was a man who was seldom sober.  This man acted in such a way that the dogs were often “set on him.”  On one particular night, this mans behavior was over the top.  The dogs were set loose and chased the man who was on his horse, through town. With the dogs still nipping at the horse’s heels, the horse did not stop at the saloon doors, but instead, keep on galloping right through the building. One of the patrons remarked, “He certainly is in a whiz!” A man by the name of Jeff Allen immediately answered with, “This is Whizzerville!”  To many, it is still known as Whizzerville, not McMahan. 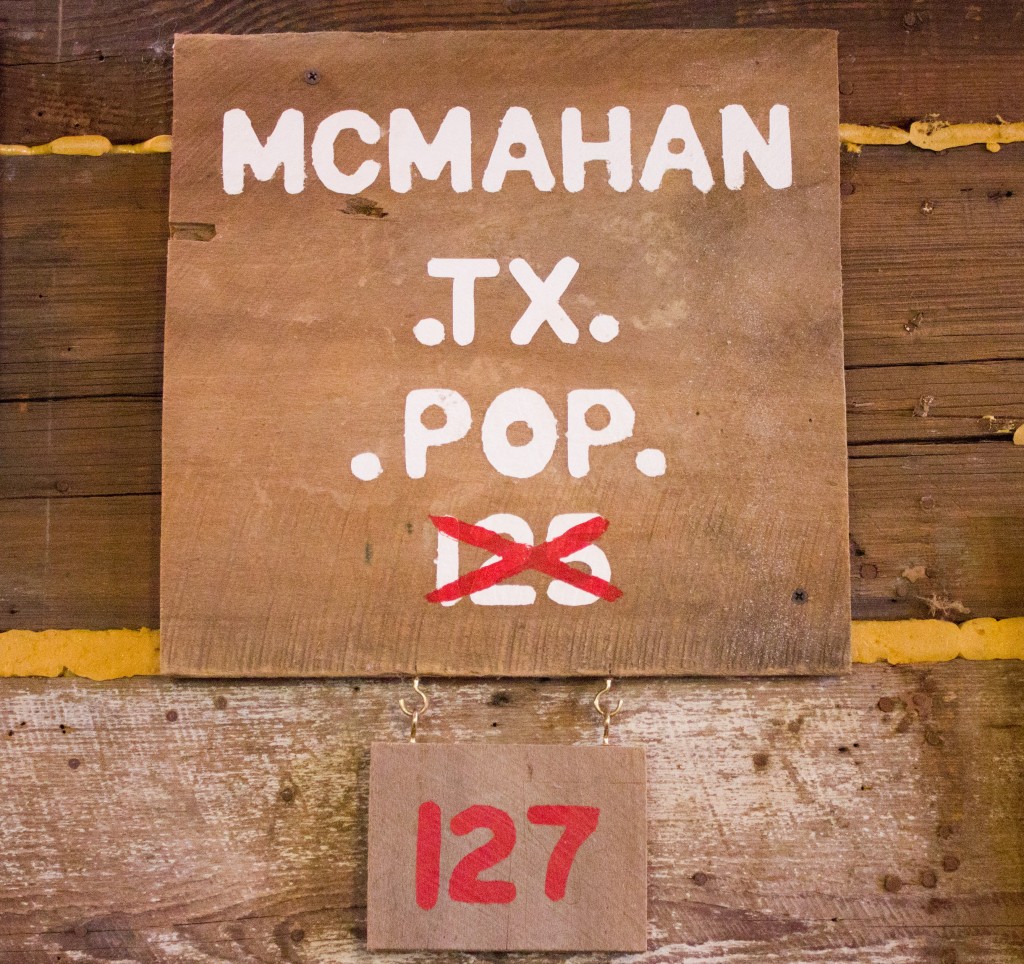 In the meantime, Tom’s daughter Amy, and her husband, Garner Meyer were living in Salt Lake City, Utah.  Garner was in the Mortgage business and was laid off with the financial demise of 2008.  Tom suggested they move back to Texas and open a restaurant in one of the buildings. 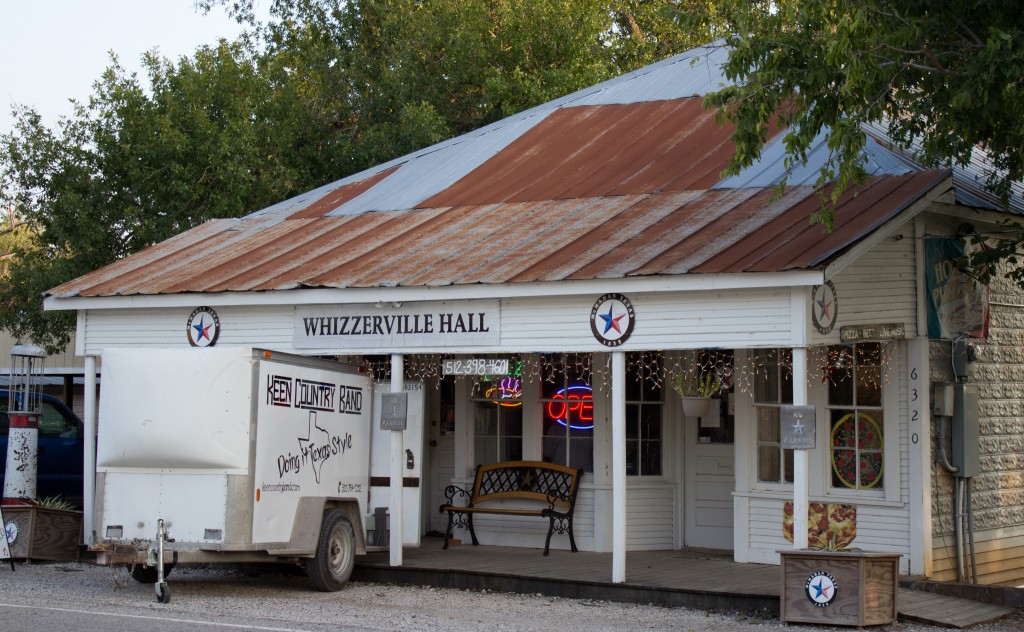 “Whizzervill Hall” was established in May, 2009.  The building is 101 years old. At one time, it was the general store, a post office, the community center and the oddest thing, a music studio. I’m not exactly sure what kind of music was produced at “Whizzerville Studio,” but I am trying to find out.

When I pulled into a parking spot just before dusk, on the first cool night since I arrived in Texas, I could hear the band warming up. I walked in the hall, grabbed a menu and settled into my spot for what was to become a long night. 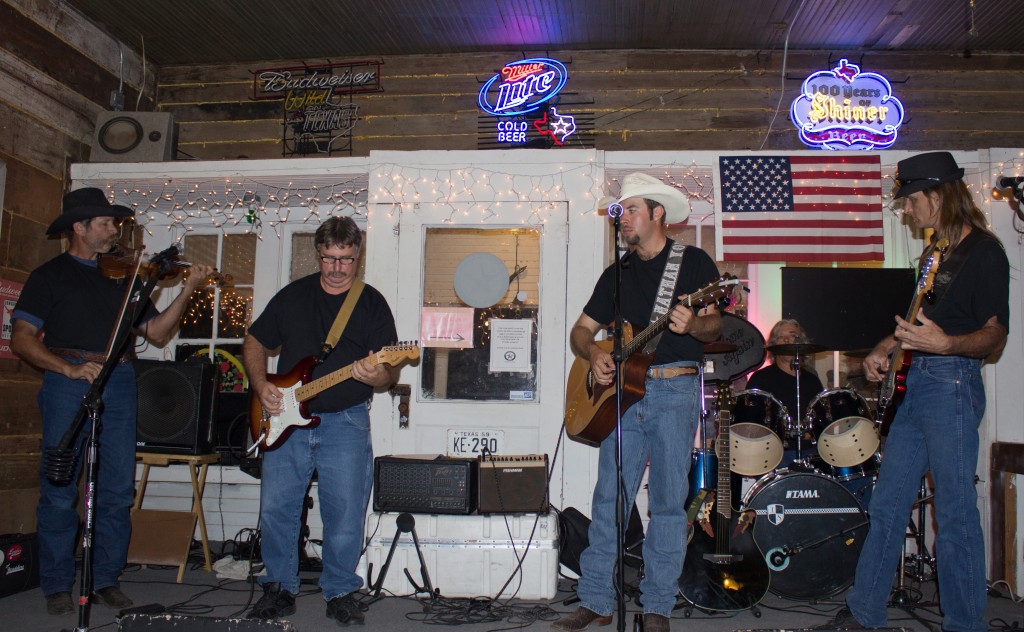 The walls in the back of the hall are covered with coasters from all over the world and there is not a duplicate in the bunch.  There is also an old safe without a combination and is too heavy to move.  There is no telling what is in there, but was assured it was not Al Capone. 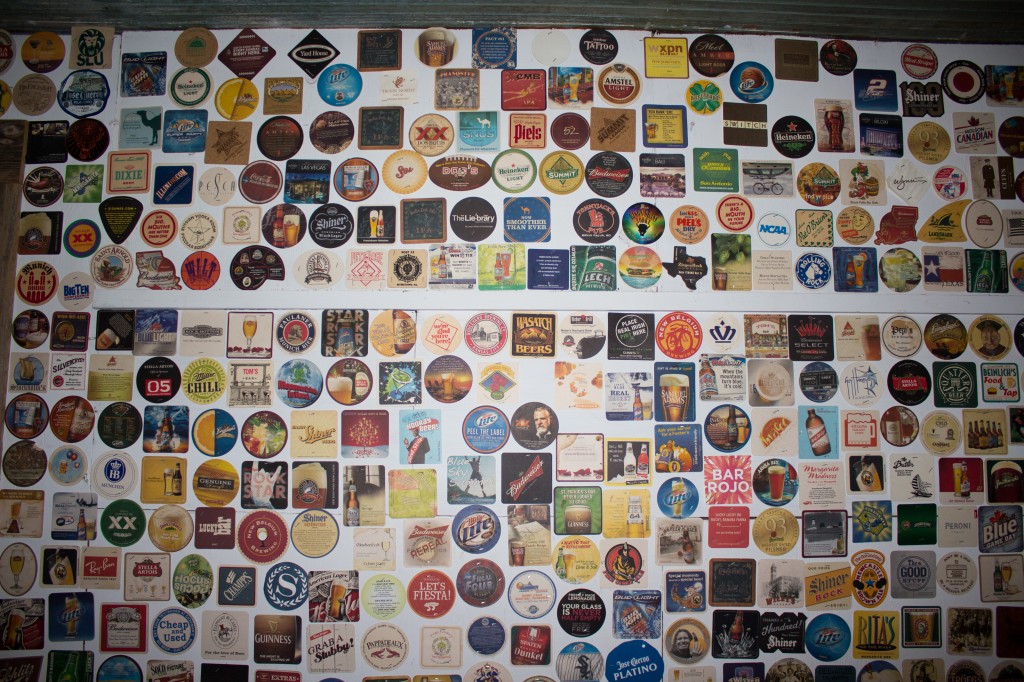 As I sat there looking over the menu trying to decide which kind of Pizza I was in the mood for, (it’s the only thing on the menu) fellow patrons started to flow in and I smiled.  The men were wearing their cowboy hats, boots and western shirts.  The women wore  dresses and cowboy boots. (I’ve GOT to find a pair!)  Even this Q-T-pie was sportin’ the look. 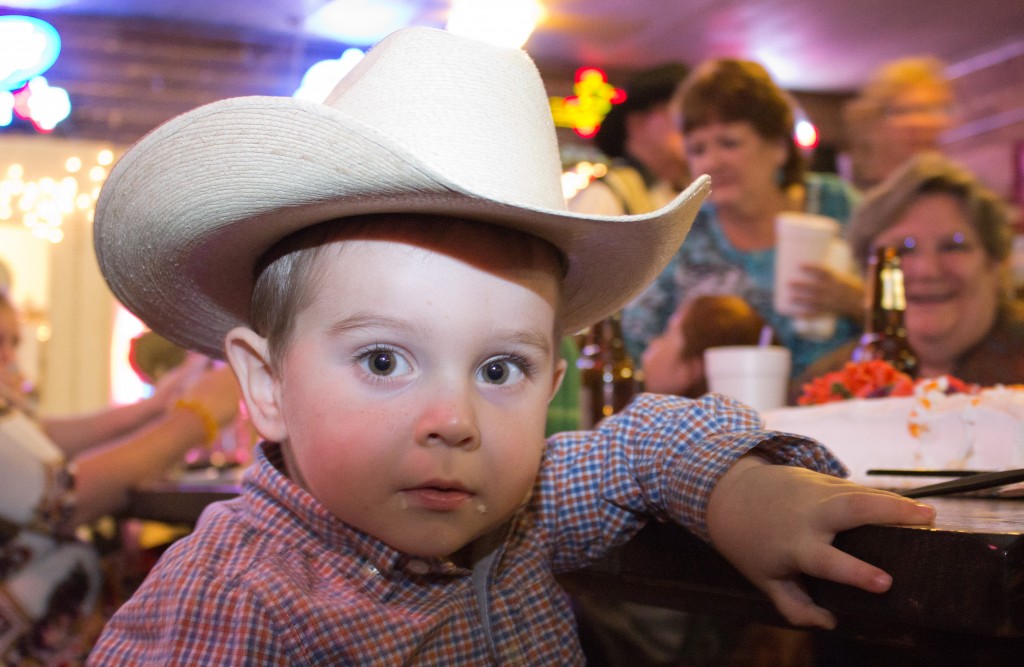 I placed my order for “The Whiz” pizza at the bar, got a frosty beverage, then sat back to enjoy the music.  The hall filled up quickly as the band, Keen Country Band played everything from the Eagles to Johnny Cash.   One of the members of the band, (not a player) asked me to dance.  I was a little hesitant because I was wearing my “duck” boots after my recent meeting with a rattlesnake.  I no longer wear flip-flops here.  I decided, “Ah, what the hell!” and got on the dance floor.  As he twirled and spun me around, I quickly realized I needed to learn the “two step” while I am here as to not make a fool of myself should someone else ask me to dance. 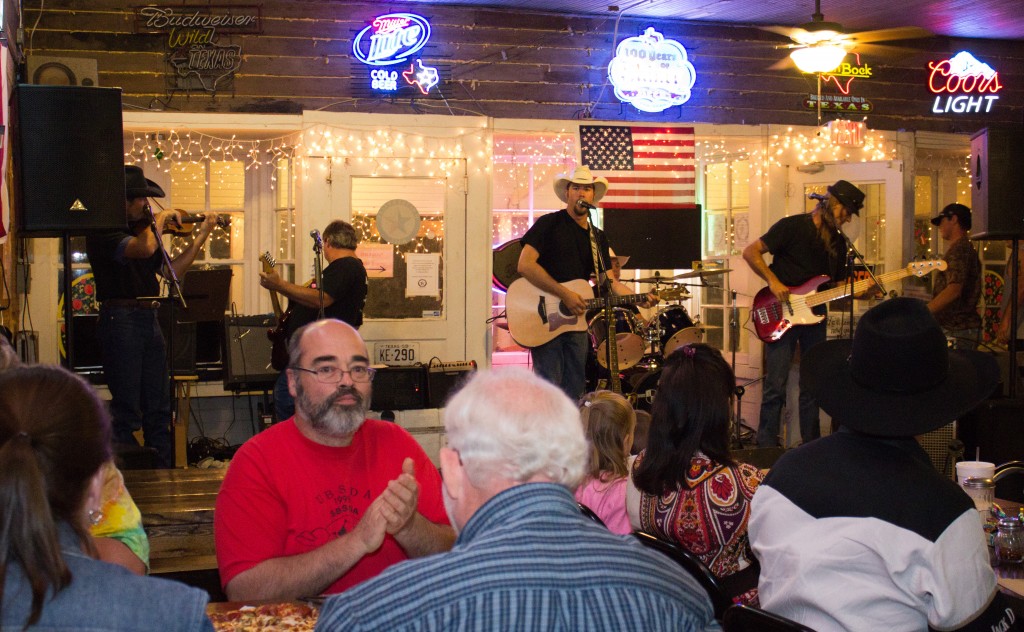 The song ended and I went to the bar to retrieve my piping hot pizza. (You place your order at the bar and pick it up a the bar.  There is no table service.)  Also, if you have several friends with you, don’t plan on all of your orders to be ready at the same time.  You will get one pizza at a time.  That is the way it works here, and not a problem with me, I like things that are different.  The pizza was stupendous!  And, I was glad I ordered a big enough one to take most of it home. Wizzerville Hall has won the Best Overall Food in Caldwell County for the past three years and was a finalist in the Best Pizza contest in Austin.  This food snob gives them two thumbs up! 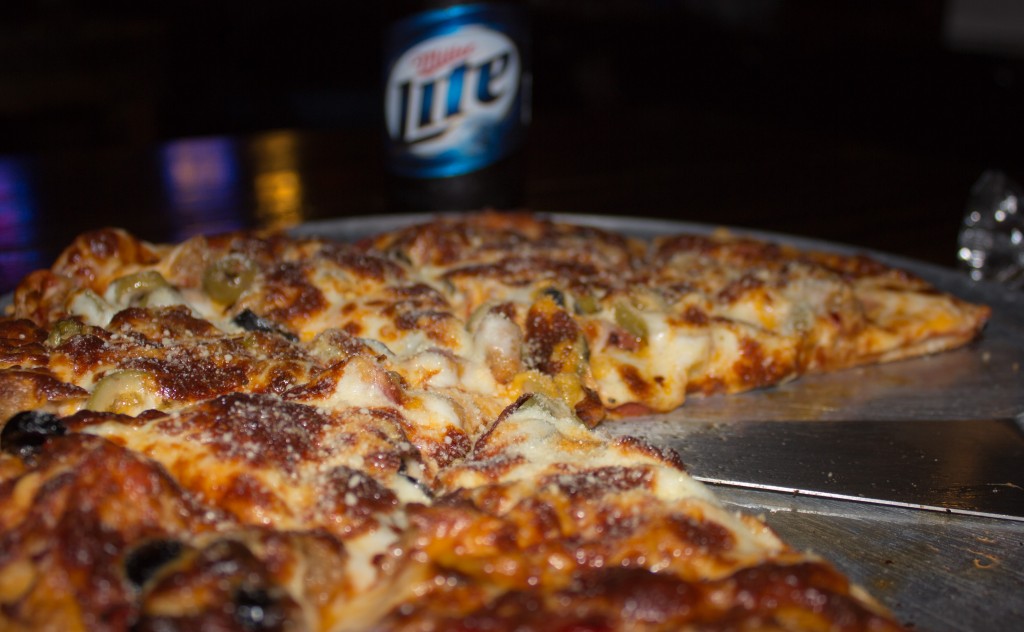 With the football game on the TV above the bar, the band playing some classic country music and people all around me enjoying a pan of the perfect pizza or dancing, I was having a great time with the locals, and I didn’t want to leave.  Then I saw the time.  I had planned on hanging around for a couple of hours, not six!  Time to mosey on down the road y’all…

The best little places you will find are on the map following the red line!