A couple of years ago I was in Jamaica with Bruce. 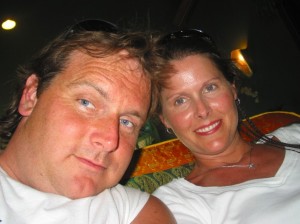 On the second day of our trip we took a sunset cruise to the cliffs where “20,000 Leagues under the Sea” was filmed. My “Ten Feet Tall and Bullet Proof” self decided I was going cliff diving. Mind you, I’m afraid of heights! I jumped in the water, swam to the stairs that were in the cave and climbed up, WAY UP. The whole time I was thinking, “What the hell are you doing?” I got to the top and walked to the edge. Nope! Not a chance in hell was I going to jump. The cliff was 40 feet high, and there were Jamaican men diving to the bottom collecting the money and anything else that came out of the bathing suits of the divers/jumpers.

I stood there watching my fellow passengers jump, one woman jumped and landed with her legs straight out in front of her as if she were sitting. The next day the back of her legs from her fanny to her ankles were bruised black! A VERY fit man wearing a Speedo (it doesn’t matter how fit you are, Speedo’s are unacceptable!) dove in. His head scraped a rock at the bottom. It was particularly noticeable because the man was black but, the top of his head was white, white, white from scraping the rocks!

I walked to the edge several times and would chicken out and walk to the back. After the fifth or so time of doing this, a young Jamaican boy told me to take the “chicken stairs mon”! WHAT? There were stairs???!!! Well, that just ticked me off, I RAN to the front of the cliff and kept going! I JUMPED! It felt as if it were taking hours to reach the water. My life was passing before me in SLOW motion! Twelve hours later, I landed perfectly! Toes pointed, hands plastered to my thighs, eyes closed.

When the water got to my ribcage, I stopped! It was as if I hit a solid block. I couldn’t move my arms nor could I breathe! I did the “Finding Nemo” swim back to the boat, bobbing my way across the water, and Bruce had no idea I had hurt myself. After everyone had gotten back on the catamaran, I bobbed to the stairs and tried to lift my arms up to grab the rails. It wasn’t happening. Bruce saw me struggling and came to the bottom, grabbed my arms and pulled me up. At that point, I think I passed out from the pain! Thirty minutes or so later, Bruce and another couple pulled me up to a sitting position, and my chest had a red rectangle with a purple thumb print in the middle. It is the classic sign of a broken sternum.

After a couple of hours, and the pain was not going away, I decided it was time to see a doctor. (I’m not a fan of them!) And let me tell you, you don’t want to be in a third-world country when you need medical attention. We American’s are spoiled when it comes to medical facilities and the treatment we receive. People who worked at the resort 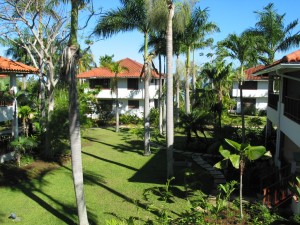 drove us to the doctor in the town of Negril, and I wish I could remember his name because he was as nice as he could be.

The x-ray equipment was rusty, and a cockroach (I HATE, yes, I said HATE them!) crawled across me! After he was finished with the x-rays he said, “Yes, you have a broken sternum and, unfortunately, there is nothing I can do for you.” He wanted us to fly back to the States that night but, there was no way I could handle the two hour bus ride and the hour and a half plane ride back. I chose to stay the remainder of our “vacation” (sorry Bruce!) The only pain medicine the doctor had was Tylenol, and I’m not kidding.

The nurse came back to the resort with us and showed Bruce how to take care of me. After she helped  me get ready for bed, she had me sit on the edge of the bed and slowly laid me down. The pain was unbearable, and I screamed out and had tears running down my face. You have no idea how much you use your chest when getting in and out of bed. I laid there motionless the whole night, no pillow, no rolling over to get comfortable, nothing. At this point, I was wondering just how bad the bus and plane ride would have been.

As you can imagine, the next few days were spent with Bruce taking care of my every need. Getting in and out of bed was the worst part. I now had two dresses I could wear because of limited mobility and I didn’t care! He had to get me on and off the potty, get me dressed, get my meals and drinks, EVERYTHING! That is not a position I want to ever be in again. (But, I am forever grateful!)

When it was time to leave, he packed us up, and we boarded the bus, and just as I expected, it was horrible! If you have never been to Jamicia, the roads are narrow and filled with potholes and curvy! 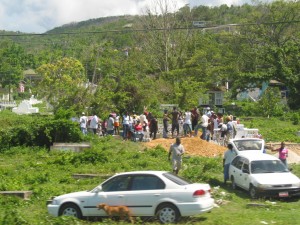 I held my chest the whole time and had tears streaming down my face.

We finally landed in Atlanta, and poor Bruce had to manage the entire load of luggage by himself. (He bought luggage with wheels after this trip!) After getting on the wrong bus to the hotel and riding around for what seemed like a lifetime we arrived at the truck, only to discover it had been broken into. Bruce’s tools and pistol were stolen. Oh, the joy of traveling! I felt  awful for him after all that he had been through with me on this trip and now this!

I had an appointment with my doctor, and after another x-ray, he wanted to do surgery and wire my sternum back together. I said, “No! I have already gone through 10 days in pain, I wasn’t about to start over.” Six weeks later I was finally able to drive and carry my own laptop by myself. One of my ribs sticks out further than the others, and I call it “my hotdog” because that is what it feels like.

I can tell you without a doubt, I will NEVER jump off a perfectly safe spot again, no matter what someone calls me!