Way in the woods. I’m talking a 34 minute drive down a one lane, winding dirt road. After a little bit of 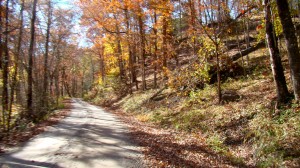 driving you start to think, “Did I miss a turn somewhere? Am I on the right road?” And then, there it is. This perfect cabin tucked away in the Nantahala National Forest. Yes, I said a National Forest! 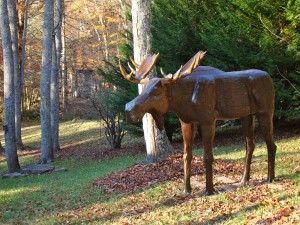 This “what else could you possibly ever want” cabin belongs to Reed and Karen Ingram, and I was a fortunate soul to be invited up for the weekend. I met Karen a couple of years ago at my shop when she needed Roman shades and bedding made for the cabin, and I will have to say, she did a fantastic job decorating their little slice of heaven! Reed is the Montgomery County Commissioner for District 5, and along with Karen, owns Reed Ingram Motors on the Eastern Bypass.

Nantahala means “Land of the Noonday Sun”. The Nantahala River runs through the narrow and steep gorge 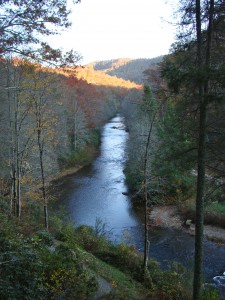 and in most places the sun reaches the ground only when it is directly overhead during the middle of the day. On this beautiful crystal clear river there are Trout and during the fall, the Salmon run up the river. Yes, Salmon! In the 1950’s or the 1960’s, the North Carolina Department of Wildlife Resources stocked the Nantahala Lake with Kokanee Salmon. In the fall the salmon make the run from the lake, up the river and ending in the Standing Indian Wilderness Area. The only time you can see the salmon is when the sun is shining on the river, and that is a very limited time frame. The whole river where they run is private, so unless you own property on the river or know someone that does there will be no grilled salmon for you.

As you know, I prefer the mountains over the beach, and at this time of year I like to be in them. I usually go to Cheaha or DeSoto State Park in Alabama and I “OOOOH and AHHH” over the colors of the leaves. I hate to admit it but, they have nothing over the colors in North Carolina. I was awestruck, and I took over 200 pictures in a day and a half. I just couldn’t get enough of the vibrant colors on the mountains. 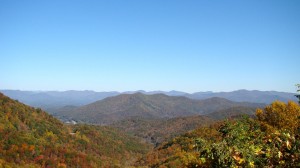 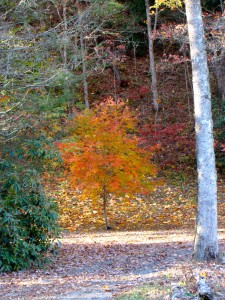 I won’t go into detail about the food, surprising, I know but, I will say Karen and Reed know how to make you feel welcome and at home. With Reed doing the majority of the cooking, (it was a girl’s weekend for Karen, Christy and I and we had a personal chef!) there was food on the table every time you turned around. And good food at that! 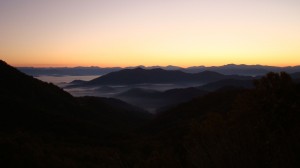 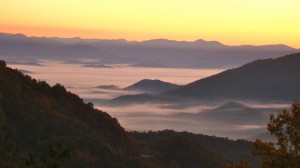 That scene took my breath away and I decided to take the back roads at a leisure pace as far as I could before hitting the interstate outside of Atlanta.