As I turned off of the paved road onto his dirt drive, I passed through the wooden gate.  And there he stood, in his blue jean overalls, Lacrosse duck boots with his pant legs stuck inside, white cotton t- shirt and cowboy hat.  His hair is white as snow, face unshaven with a long white mustache and crazy bushy eyebrows.  He greeted me at my car and handed me a cold longneck beer.  I of course did not turn it down. His name is Slim Dicks, and that is no lie.  He is 75 years old and is as good as the day is long. 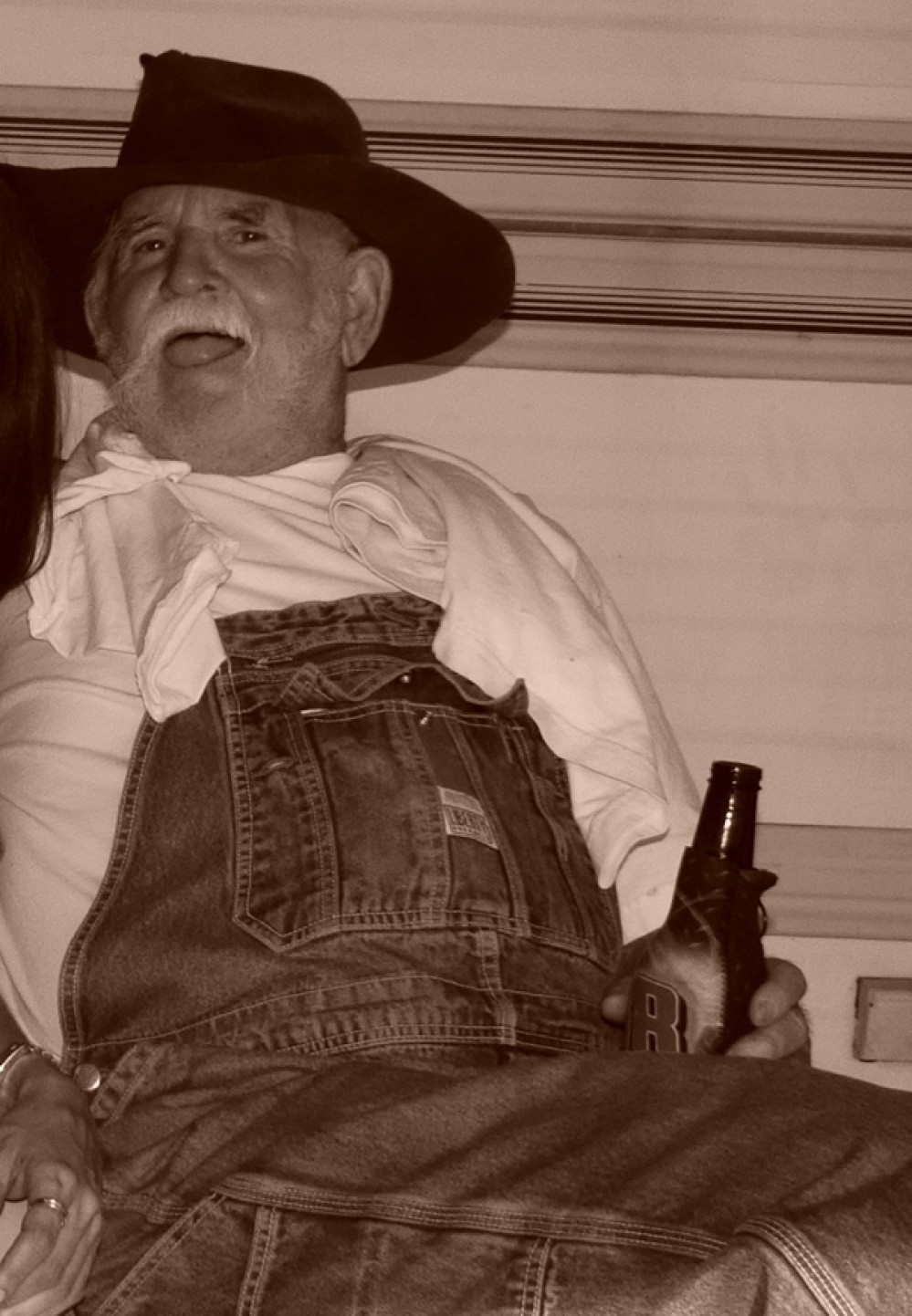 We walked around his little piece of heaven in Grady, Alabama, a small community off of Hwy 231.  This is a town where people still wave when they pass you by on the road.  His home is a travel trailer.  He has a barn for his horses (that is much bigger than his home)  and some land surrounded by trees.  There is a vegetable garden in the front that he is about to plow so it can be planted in a couple of weeks.

We sat down at a picnic table under a large pavilion that is covered with a tin roof. I can only imagine how nice the rain sounds on that roof.

With the whirl of the ceiling fan on high, he started telling me stories.

Slim was born and raised in Grady with his nine brothers and sisters.  He comes from a farming family and still farms to this day.  Slim told a story of when he was 8 years old and the school he attended (which is now Sikes and Kohns Country Mall) served canned spinach at lunch.  He didn’t like it and it made him sick.  You have to remember everything they ate at home was fresh from their garden, and the meat, from their own animals.  The teacher told him he had to sit there until he ate it all.  (Imagine that happening today.)  He said, “Awight.” There was no “l” or “r” sound in the word he said.  Slim waited and waited.  All the other classmates had left and he was still sitting there.  He kept looking back at the door that was open towards the field and waited until the teacher turned away.  Out the back door he ran, through the woods and all the way to his home which was five miles away.  When he got home he got the mules out and started plowing the fields.  After a while his teacher came to his home and told his father that Slim had run away.  His father asked why would his son run away from school and Slim’s teacher told him what had happened.  Mr. Dicks said, “No harm done, he is out back plowing right now.  But don’t make him eat that spinach again.”  Slim has not touched spinach to this day.

Slim’s first paying job was at the age of 16, and it was with the United States Army.  The year was 1951 and he was sent to Munich, Germany.  From there he went on to fight in the Korean War.  He returned to Alabama in 1953 and only left once to live in Ft. Worth, Texas.  That lasted six months and he once again returned to Alabama.  Slim, with a smile on his face, spoke of his brothers and sisters and how they loved to be at home together and loved the land.  He learned to plow with a mule at a young age and spoke fondly of doing so.  He showed me the three different plows that were used and how the mules were harnessed.  Although he didn’t talk about it, I got the feeling he enjoyed the convenience of today’s technology by how clean the tractor was that he had in the barn.  Then again, maybe he didn’t use it.

I have spent 30 years in the south and have adjusted to the fact that everything outside will be covered in a thick layer of yellow pollen in the spring.  This is the time of year you want to open the windows and let the fresh warm air in, but if you do, your furniture will also be covered in the stuff!  I have chosen to leave the windows open and vacuum and dust often.  While sitting at the picnic table listening to him talk I watched my car quickly become covered in the yellow dust.  I then for the first time ever saw where this allergy hazard came from.  Large plumes of yellow pollen came from the pine trees that surrounded the farm. It looked like the trees had sneezed, and a dust storm was coming from these trees.

As the carpenter bees and wasps flew by, Hank Williams Sr. was singing in the background and the smell of something good was coming from the grill he had going.  He talked of the many different jobs he has had, including that of being a trucker.  That is one job I have always wanted to do.  Slim started laughing and said one man he drove for sold meat to different military bases.  Slim arrived at the loading dock earlier than the workers did and had to wait for them.  When they finally arrived he was frustrated and yelled, “Y’all unload this sh_! I gotta go!”  Unfortunately that was not how the military did things.  His boss man at the time talked of that for years.   For the last 15 years or so he has bred and sold horses.  The horse I led around his farm was a blue horse.  His coat was literally blue in color.  He was large and rather intimidating and I’m sure he knew I was not comfortable.  Slim asked if I wanted to ride him but I declined.  Maybe next time I would.  It was rather warm for a mid March afternoon, and I was anxious to get out of the sun as I was “glistening” profusely.

We sat under the tin roof for a couple of hours telling stories, drinking beer and eating the chicken wings he pulled from the grill.  Slim leads a simple, uncomplicated life, and it is a kind of life that I am trying to establish for myself.

As the sun started fading behind the trees that were spewing their pollen, I thanked Slim for a great afternoon and gave him a hug.  He asked if I would like to come back next weekend and go to the rodeo with him.  I told him I would be honored.

On my drive home I thought about all I have and what little he has.  I will have to say he is the happier of the two.  I am happy, don’t get me wrong, but it seems our society puts too much emphasis on possessions and always wanting more.  I have been getting rid of my “excess” stuff over the past few months as I get ready for this journey, and I will say I am happier.   We all could learn something from Mr. Slim.