Isn’t that how some of the funniest or most intriguing stories start?

I remember one time when I was six years old, my Uncle Tom came home from work, and he usually had a “surprise” for my sister and me. It was most often a piece of candy. On this particular night he said,” If you want it bad enough drop to your knees and beg.” My sister dropped quickly to her knees and begged, “PLEASE! PLEASE! PLEASE!” 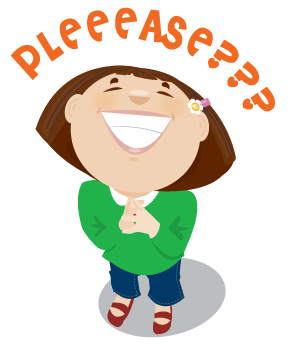 I just stood there. My Uncle asked if I was going to beg, I said,”No”. He asked why, and I responded with, “If you have to beg for something you will usually find out it wasn’t worth begging for.” I still believe that to this day, and I have not begged for anything…yet.

I remember one time when my little brother, Tommy, who was probably six or seven at the time, came home, and he had a piece of gum in his mouth. My mom asked where he got it from. My brother said, “Well, I was just walking down the street and it flew into my mouth!” I still laugh about that one. 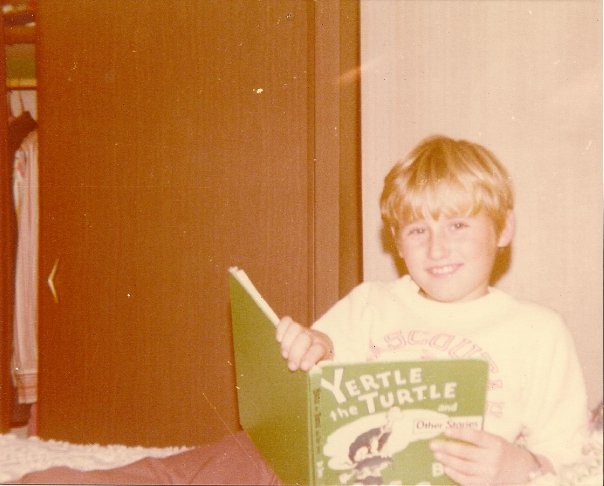 I remember one time when Cameron was an infant; Austin came into our room EARLY in the morning and said, “Mom! He’s crying again! Can’t you make him stop? Why don’t you take him back where you got him from!?” It was cute coming out of a four years old mouth.

I remember one time when all six of us kids were home for the summer, and it was HOT for Illinois standards. My mom wouldn’t let us in the house; she needed a little peace and quiet. This is something I didn’t understand at the age of 9, but fully understand at the age of, well, anyway… so we decided to “protest”. We all made picket signs with objects collected from the neighbors and started protesting in the front yard. “We want in!” “It’s hot out here!” “We want our allowance!” This lasted for all of 6 minutes. With the neighbors watching and laughing, my mom stuck her head out the front door and said, “Get in here now! All of you! NOW!” Moms’ brief moment of “peace and quiet” was quickly shattered by six kids running around the house. That one is a family classic. 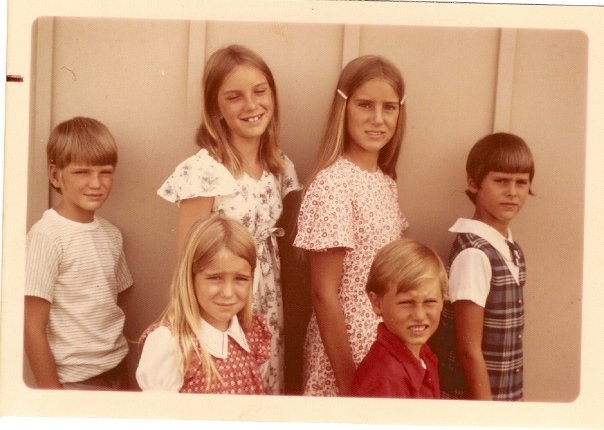 I remember one time when I was driving down Wares Ferry Road when a car stopped in front of me. Just STOPPED! No reason, there was nothing in front of her. I ran off the road into the ditch. I had my boys in the car, Austin was 4, and Cameron was just a couple of months old. After I knew we were all OK and the adrenaline rush was over, I drove straight to Jack Ingram and bought a Volvo. 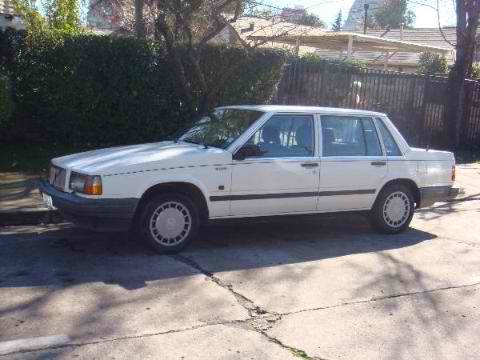 When I got home I called my Ex who was in South Carolina on business and said, “If I can buy a Volvo for $20,000.00, can I get it?” His response was, “NO!” I said, “Well, too late. It’s in the driveway.” And I hung up. He drove home that night. He loved the car, and I paid for it with my sewing money. P.S. I did the same thing with a house, I put our house on the market while he was away and built the big house. One would think he would have learned not to leave me for 3 weeks at a time but, he never did.

I remember one time when we drove from Scott A.F.B., Illinois to Seguin, Texas to spend Christmas with my Grandmother on my dad’s side. Three kids in the backseat of a Ford Country Squire Station wagon. Complete with the wood grain paneling down the sides. 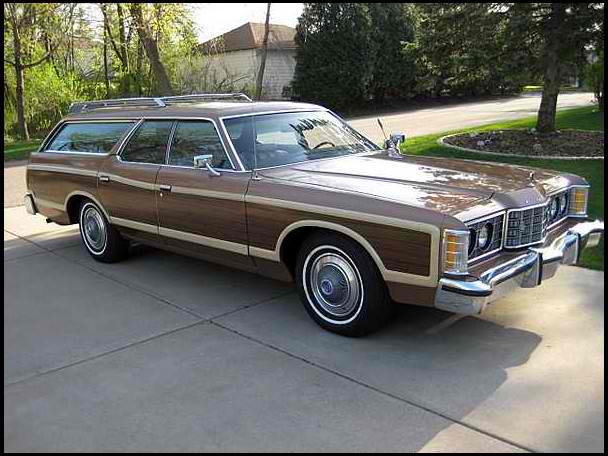 We were stylin! We arrived in Texas on Christmas Eve, and the only restaurant open was Pizza Hut. It was a little disappointing, but at least I didn’t have to eat broccoli! The next day we went to grandma “K’s” house. I swear she must have gone around the house collecting things to give to us kids. My sister got a long dress that was a woman’s size 14, I got a board game that didn’t have all the pieces, and I can’t remember what my brother got. Everything smelled like moth balls. That is all I remember about the whole trip.

I remember one time when I was 12 or 13 years old, I was the biggest tom boy you ever met. Imagine that! I was playing cowboys and Indians with the guys, and I tripped over a bush and ran my leg into another tree. I broke my leg, and it was one week before school was out for the summer! 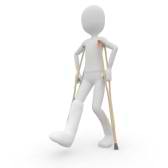 No swimming, no bike riding, no running around until the street lights came on. Nothing! I felt like my life was over! I broke several bones while living at Scott A.F.B, and you would think I would have figured out I wouldn’t get so hurt if I played with the girls instead. That didn’t happen until I moved to Germany.

I remember one time when Austin was 16 and driving. He came home from school one day and said his car was making a funny noise. His oil light had been on for a couple of weeks, and he didn’t think it was a big deal. That was car #1 and a new motor was put in after it was destroyed because of no oil. I won’t go into all the details of his numerous cars, I believe he has had 13 or 14 and remember, he didn’t have one from the age of 18 through 23. One of them “just blew up in the drive way! It was just sitting there and blew up!” The truth came out years later. 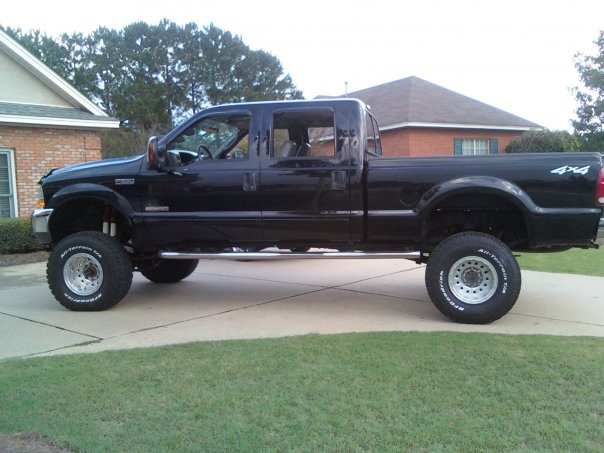 I remember one time when Cameron was 2 days shy of turning two, he fell and hit his mouth on the fireplace hearth. The fall busted one of his front teeth out. I got a Popsicle and stuck it in his mouth, called the dentist and he said to push the tooth back in. Now remember, I don’t do blood extremely well. The tooth ended up dying and I was thankful it was his baby teeth. That was the beginning of his accidents. My sister’s dog accidentally clawed his face when Cameron was holding a slice of pizza up for the dog to get. It ripped his eye, torn open his cheek and ripped part of his top lip off. Next, he rolled into a neighbor’s glass table with his head and got a lovely gash, thankfully she was a nurse. Then he hung himself on a fence through his wrists at the ballpark after I told him to come down off of the electrical box. He dropped a plate of pancakes on his toe and severed the tip of his toe off a couple of days before school was out for the summer. He also ran into some rebar sticking out of a pile of bricks at a house that was under construction. The rebar caught him right across the tops of his cheeks and the bridge of his nose. And last but not least, he was ice skating with his brother in Illinois when he tried to help a child from falling. Cameron ended up catching the kids blade just above his eye brow. Several hours later of stitches, and covered in blood, the only thing that he was worried about was he still going to be able to go to the zoo. Other than a ruptured appendix, he hasn’t had any accidents since! That was enough for a life time if you ask me!

As we get older, the” I remember one time when” gets better. And our kids start telling us things we had no idea went on. Some of it I’m glad I didn’t know about, but most of it is pretty funny. When I get together with family, I get to hear some pretty funny stories about their childhood now that I’m an “adult”. Those are the best ones.